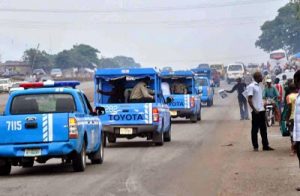 The Federal Road Safety Corps, Lagos Sector Command has issued a statement alerting motorists who intend plying the Lagos/Ibadan Expressway between Friday 1st to Sunday 3rd July, 2016 to either move early or take alternative route to avoid being trapped in traffic as a result of the various religious activities that will take place along the major expressway.

According to a statement by the corp, the Redeemed Christian Church of God (Holy Ghost Service) and NASFAT Annual Ramadan Vigil will hold simultaneously today July 1st 2016 while Mountain of Fire Ministry will also hold its monthly power must change hands program on Saturday 2nd July, 2016. This coupled with the on-going rehabilitation work of the road makes it inevitable that there will be heavy volume of traffic considering the number of worshippers that will be participating in these programs.

The Corps therefore advices motorists who do not wish to attend the program to seek alternate routes In and Out of Lagos.
Alternative routes suggested are as follows:
– Lekki – Epe – Ijebu Ode to link Sagamu or Ibadan
– Lagos – Abeokuta Expressway through Sango Otta – Owode – Sagamu
Interchange
– Ikorodu – Odogunyan – Sagamu – Ibadan
Motorists are hereby advised to Corporate with FRSC officials as well as
other traffic Management agencies that have been deployed to control
traffic during the programs.
Already the Corps has deployed 20 patrol vehicles, 5 Ambulances, 2 heavy
duty tow truck and 200 Officers and men to control traffic during the three
days programme.