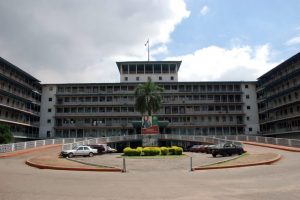 The Accident and Emergency Unit of the University College Hospital (UCH), Ibadan was yesterday gutted by fire.

The unit’s central air conditioning systems and other equipment were destroyed by the fire.

Witnesses said the blaze, which started around 4:15pm at Medical Store Casualty Unit, was caused by a gas explosion from the central air condition.

The University of Ibadan (UI) fire truck was the first on ground to quell the fire before the Oyo State Fire Services joined with two trucks.

The blaze was stopped by after 5pm.

No casualty was reported, but the incident caused chaos in the hospital and patients were evacuated to nearby facilities.

Inspecting the damaged facilities, the Chief Medical Director of UCH, Prof. Temitope Alonge, said the fire started around 4pm during his hospital rounds.

He listed the major damages as the ceiling, the roofing, mattresses, some equipment and the central air conditions.

Alonge said the hospital has made arrangements to attend to emergencies at the general patients department.

He said: “I was at the second floor of the theatre complex building when I heard shout of people crying for help and smokes coming out of the ward. I came around immediately to help.”

Alonge confirmed that there was no casualty and nobody was injured.

“What I understood that happened was that, earlier in the day, the head of electrical department noticed that the solar panel switch had a fault and it triggered a spark and they attended to it.

Court orders Metuh to face trial or be arrested