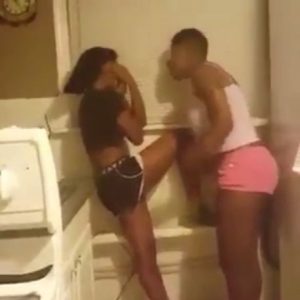 A mum who believed her teenage daughter had started a sexual relationship in her house, decided to live stream herself beating her as punishment on Facebook.

In shocking scenes the woman can be seen first hitting the 16-year-old with plywood before using her bare hands as the terrified teen cowers in a corner.

According to reports the incident was sparked when the teen Nia Green  shared a picture of herself and her boyfriend wearing no more than a towel to her Facebook page, photo below.

Her mother got wind of the picture and in anger decided to take the girl’s phone and live stream a beating to the girl’s Facebook page. 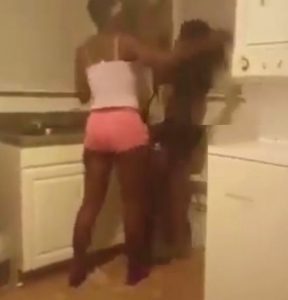 An unknown third party is involved in the disturbing incident, as the mum hands camera duties over to someone else who she instructs to keep filming as she beats her face, abdomen and head repeatedly.

After the beating, she then walks over to the recording device and claims that she is taking over her daughter’s Facebook profile for the foreseeable future.

But the woman, who has not been named, seemed to have some remorse over the incident after a backlash erupted on social media.

She later posted on her daughter’s page: “I love my daughter with all my heart [and she] is not going to disrespect me or herself or nobody.

“Ain’t nothing changed, she still my baby girl. Lesson learned.”

A day after the incident,  Nia made a post on Facebook , saying that she deserved to be beaten by her mother :

”First Off I Shouldnt Embarrassed My Moma , I Love Her . Yes this is me . Niaaa . I Shouldnt even been doing what i did. No i didnt have vari in my house when she said not to . I was at his house . Im only 16 yrs old . I was gonna open up and tell her that i was having sex . I was just gonna wait a couple days to see how i was gone tell her . I understand why she did what she did . Everybody laughing and making reenactments . Sharing my pictures im seeing everything. I did go to the hospital only because i have exotic attacks & real bad head ache . I embarrassed my moma so she embarrassed me” . Im not defending the live video cas when school start next week all eyes on me . Im at work all eyes on me . I kno next time to just keep my business to  myself.

But outraged viewers have demanded that social services intervene to investigate the situation, deeming it child abuse .

It is not known whether any action has been taken as of yet, but a Facebook group in support of the teen has been created by disgusted social media users.

Watch the video below: