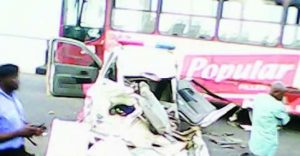 Five persons were yesterday, August 14, 2016 confirmed dead and 13 others injured in multiple auto accidents on Third Mainland Bridge, Lagos State.
Three vehicles were involved in the crash which occurred at about 6:10p.m. The vehicles were a Lagos State government-owned (LAGBUS) bus, a Toyota Hilux owned by a local vigilante group and a Rover SUV.
Confirming the accident, LASEMA General Manager, Mr. Michael Akindele, warned drivers against speeding and to adhere to all traffic rules and regulations.
It was reported that the accident occurred at the Iyana-Oworo end of the bridge, leading to a traffic gridlock.
The Lagos State Emergency Management Agency, LASEMA, Response Unit recovered the vehicles, while the bodies recovered from the scene were deposited at the Mainland Hospital Mortuary by Lagos State Environmental Health Monitoring Unit, SEHMU.
However, the 13 injured persons were taken by Lagos State Ambulance Service, LASAMBUS, to the Truma Centre at the old toll-gate end of the Lagos-Ibadan Expressway. -Punch