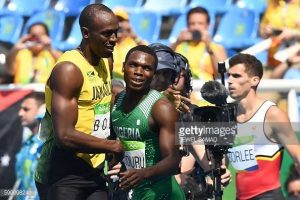 He came second after Olympic gold medalist and Jamaican athlete, Usain Bolt.
Oduduru, who declared the intimidating status of the Jamaican does not scare him lined out in lane eight of the ninth heat of the 200m event and with a determined effort emerged as second.