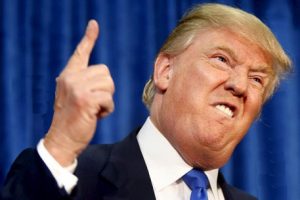 Donald Trump asked a woman with a crying baby to leave a rally in Virginia on Tuesday.

At a rally in Ashburn, the Republican nominee for US president stopped his speech when a baby began to cry.

Initially, he suggested he didn’t mind the noise, telling the crowd: “Don’t worry about that baby. I love babies. I hear that baby crying, I like it. What a baby. What a beautiful baby. Don’t worry. The mom’s running around like – don’t worry about it, you know. It’s young and beautiful and healthy and that’s what we want.”

Trump then briefly went back to criticising China, claiming when the country devalues its currency “they take our guts out”.

However, the baby continued to cry, and Mr Trump then asked the woman to leave. “Actually, I was only kidding, you can get the baby out of here,” he said. “That’s all right. Don’t worry. I think she really believed me that I love having a baby crying while I’m speaking. That’s okay. People don’t understand. That’s okay.”

The woman and her baby appear to have then left the area.