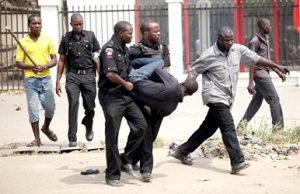 The Lagos State Police Command has arrested two suspects who posed as soldiers and abducted a 15-year-old girl in the Oworonshoki area of the state.

Two suspects identifed as Damilola Balogun and Joseph Agbo, who posed as Nigerian soldiers, abducted and allegedly r*ped a 15-year-old girl overnight, and left her by the roadside last Friday on Akerele Street around 10pm in the Oworonshoki area of the state, have been arrested by the Lagos State Police Command
According to a report by Punch Metro, the teenage victim, Funke, was sent on an errand by her parents when the two men who put on a military camouflage, waylaid her with a motorcycle, ordered her to climb their okada and rode away to a hideout around Murtala bus-stop in the Bariga area and allegedly r*ped the teenager till daybreak.
The matter was reported at the Oworonshoki Police Division, after which police operatives trailed and arrested the duo – 20-year-old Balogun and 26-year-old Agbo.
“The victim came to report the matter at the station. She was on an errand along Akerele Street in Oworonshoki when the men, who wore army camouflage, accosted her.
“Before she could cry for help, they had forcefully whisked her away on a motorcycle to Muritala bus stop where she was raped till daybreak. They threatened to kill her if she shouted. They later released her in the early hours of the second day,” a police source said.
According to SP Dolapo Badmos, the Lagos State Police Public Relations Officer, four Automated Teller Machine (ATM) cards and 17 identity cards were recovered from the suspects.
“The police recovered items which included military camouflage, two berets, two mobile phones, four ATM cards from different banks, and 17 ID cards bearing different names. After interrogation, it was discovered that the suspects were impersonators.
“They are also suspected to be hoodlums terrorising the area. The suspects will be transferred to the Special Anti-Robbery Squad for further investigation and prosecution,” she said.

Osinbajo: NNPC not FG bears the price of gas subsidy