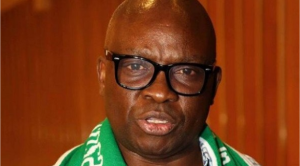 “We will allow God to choose for us this time by ensuring that all aspirants have a level-playing ground.
“I have learnt my lessons on Ali Modu Sheriff and I take full responsibility for the consequences. Imagine, if we have allowed him to get there, with the way he is now behaving, it would have been worse than this.”
He lambasted those playing lip-service to the reconciliation efforts in the PDP because of selfish interest. However, Dokpesi pleaded with the delegates to allow him to serve the party and return it to the winning ways.
Dokpesi also denied stepping down for a former National Vice-Chairman of the party, Chief Bode George.
He stated, “Some people have alleged that I have surrendered for our elder in the party, Chief Bode George. Let me make it categorically clear that I was born and bred in Ibadan and I do understand and appreciate the Yoruba traditions so much and so I have respect for elders.
“But there was no time that Chief Bode George and I met and discuss this issue and I did not in any way surrender the race to him. I have not stepped down for him in any way because this time we need fresh and younger blood that would have the physical and mental alertness for the job.
“I have been touring 17 states of the federation for just about a week now and I’m still strong.”