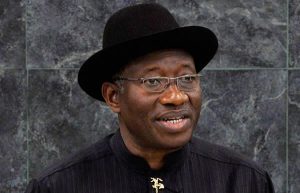 The life of the immediate past President of Nigeria, Goodluck Ebele Jonathan is currently being threatened by militants.

Militant group, Movement for the Emancipation of Niger Delta (MEND) has been accused to planning further assassination attempts on the life of Dr. Goodluck Ebele Jonathan after the 2010 Eagles Square, Abuja bombing on independence day while the People’s Democratic Party chieftain was to address Nigerians.
According to Daily Trust, Jonathan in a statement approved by his Media Aide, Ikechukwu Eze yesterday, 7th of August also denied membership of the Niger Delta Avengers militant group.
It should be recalled that a splinter group of the NDA named the Reformed Niger Delta Avengers alleged Jonathan is their ‘patron’ with so many PDP chieftains and Chief Government Ekpemupolo funding them covertly as revealed by a Spokesman for the RNDA self-styled Cynthia White.
He described the allegation by one Cynthia White, purportedly from MEND, as “too cheap and false”.
He said the “violent and murderous underground” group led by one Henry Okah, which he said had not hidden its intention to destroy him and had made several attempts in the past to eliminate him had not achieved its aim because of God’s protection upon his life.
“For the avoidance of doubt, we are fully convinced that such an idiotic claim is too cheap a narrative, a facile contrivance so badly concocted that any discerning mind would easily see through its disingenuous and duplicitous nature.
“We, therefore, have no doubt in our mind that MEND, as a group contracted to go after Jonathan with the mind of assassinating him, is yet to abandon this criminal and ignominious craving.
“It is in this light that we view the purported statement issued by ‘Cynthia White’ as not only a sadistic continuation of this sick desire, but also a futile attempt to instigate the federal government to needlessly go after the former President.
“Those who have been following the unsavoury developments in some parts of the country since the last general elections, especially the ones that held in the South-south states, would have noticed that the ‎nefarious MEND, their pay masters and other unscrupulous elements in the region, have been striving fruitlessly to exploit the ensuing ‎confusion, by surreptitiously working for the fulfilment of its yet-to-be declared political agenda.
“It is our considered view that the statement in question is an off-shoot of that ignoble plan, this ‎time plotting to rubbish and torpedo the ongoing peace efforts in the region,” the statement said.
“We are not under any illusion that more accusations and allegations of this nature would not be hurled Jonathan’s way in the future, especially as his enemies appear to have perfected the act of throwing mud each time his profile gains added impetus and acclaim,” it added