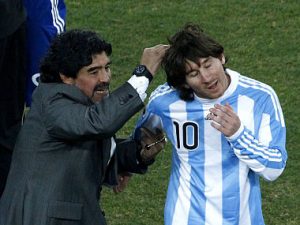 Argentina football legend Diego Maradona believes Lionel Messi will not reverse his decision to quit the national team due to the “weak leadership” of the Argentine Football Federation (AFA).

The five-time Ballon D’Or winner announced his retirement from international duty in June after missing from the spot in Argentina’s penalty shoot-out defeat to Chile in the Copa America Centenario, La Albiceleste’s third major final defeat in as many years.

Former Sao Paulo manager Edgardo Bauza, who replaced Gerardo Martino at the helm earlier this month, travelled to Spain on Wednesday to discuss Messi’s future but Maradona believes the Barcelona forward will not go back on his decision.

“I think Messi is going to say no to Bauza. This is my thinking. Maybe I’m wrong,” Maradona told Radio La Red.

Messi’s shock announcement came just days after he described the AFA as a “disaster” on his official Instagram account after the team’s flight to New Jersey for the Copa final was delayed.

And Maradona believes the latest dispute, coupled with Argentina winning just three of their opening six qualifiers for the 2018 World Cup, reflects the extent of the problems within the governing body.

“We are very bad. We run the risk of not going to Qatar,” the 1986 World Cup winning captain said. “I’ve never seen such weak leadership.

“What happened with Messi exposes what’s been going on for a lifetime.  How is it that the families of the [AFA] leaders are more comfortable than the players?”

Maradona announced he was seeking an audit of the AFA last month, describing the governing body as a ‘mafia’.

Argentina suffered a further blow on Wednesday, exiting the Olympic Games at the group stage following a 1-1 draw with Honduras.

Woman accidentally shoots self while posting on Snapchat