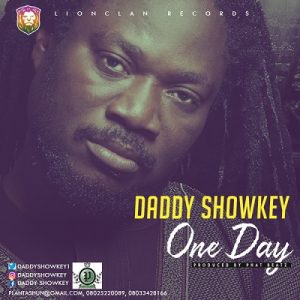 Nigerian music legend Daddy Showkey, is out with a brand new single titled ‘One Day’ for you to download and listen to.

JOHN ASIEMO popularly known as DADDY SHOWKEY needs not much intro as he is known the world over for his dancehall-like genre of music and as the creator of the GALALA dance steps which led to the creation of the galala/konto sound.

DADDY SHOWKEY is by all means a selfless humanitarian/advocate that will stop at nothing to ensure that the have-nots are taken care of or attended to, hence the new single titled ONE DAY.

ONE DAY is a song produced by FATTBEATS that describes how hard work, prayers and patience yield unexpected results.
He is basically saying, he recognizes you have been working hard, “please don’t let up because there is uncommon success ahead”.

LION CLAN RECORDS and PLANTASHUN ENTERTAINMENT are presently working on a smashing new album for Daddy Showkey. Watch out!

His project is been handled by OWOYEMI ‘NATZ’ NATHANIEL & IFEANYI ‘ODOGWU’ OJI alongside BOLA KESSINGTON. He is under the PLANTASHUN ENTERTAINMENT MANAGEMENT.

Femi Falana To FG On Seized N13bn: Don’t Play With The...