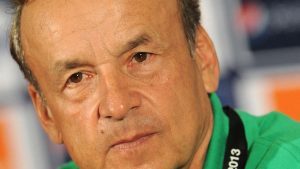 The coach is to arrive the country today alongside two of his aides and would thereafter sign the dotted lines in lagos ahead of his unveiling on monday in Abuja.

NFF president Pinnick Amaju who disclosed this yesterday in Lagos said Rohr would on sunday watch the NPFL match involving Ikorodu United and visiting 3SC of Ibadan at the Onikan Stadium, Lagos.

Giving reasons why they (NFF) went for the German tactician, Pinnick said:”The factors we considered are his experience and pedigree, the fact that he understands the African terrain and speaks good english. Communication won’t be a problem and he is a very knowledgeable coach.”

The Eagles are billed to begin their Russia 2018 World Cup qualifiers campaign against Zambia in october. The other countries in Nigeria’s group are Algeria and Cameroon.