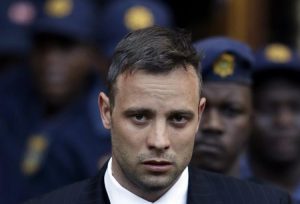 Oscar Pistorius was treated for minor wrist injuries at a hospital and has been returned to a South African jail where the disgraced former Olympian is serving a six-year sentence for killing girlfriend Reeva Steenkamp, officials said Sunday.

The report of injuries to Pistorius, who denied he had tried suicide, came as athletes compete at the Olympic Games in Brazil.

Pistorius and his coach said before Steenkamp’s 2013 killing that they wanted to retire together at the Rio games.

Pistorius told officials that he suffered the injuries after falling out of bed, said Singabakho Nxumalo, a spokesman for South Africa’s correctional services.

The former track star was initially treated by medical staff at the Kgosi Mampuru II prison in Pretoria, and then transferred to Kalafong hospital, said Manelisi Wolela, another official. Pistorius was returned to his cell on Saturday, and an investigation is underway.

“Oscar Pistorius denied speculations of a suicide attempt,” Wolela said in a text message to media.

During Pistorius’ sentencing hearing in June, a psychologist testified for the defense that the athlete was a “broken” man whose mental state had deteriorated over the last two years.