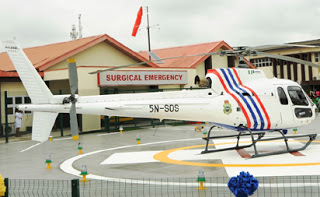 Lagos State Governor, Mr. Akinwunmi Ambode on Thursday commissioned the first state-owned Helipad for medical emergencies in Nigeria at the Lagos State University Teaching Hospital (LASUTH), Ikeja, adding that the upgrading of the 247-bed and five Theatre Suits for pregnant women, popularly called Ayinke House, would be ready for use by 2017.

Governor Ambode, who also inspected medical facilities at the LASUTH complex, said as part of efforts to transform the health sector in the State for optimal performance, the Bola Tinubu Health and Diagnostic Centre will soon become operational, while approval had been granted for the rehabilitation, upgrade and bulk purchase of medical equipments required in 20 Secondary and 21 Primary health facilities across the State. 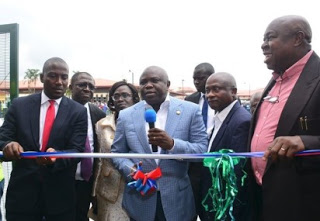 “This Helipad being commissioned today is a lifesaving asset and critical complement to the efficient functioning of this Unit and other emergency services being rendered by the State. The Helipad will also aid the movement of patients from remote areas where healthcare facilities to provide the level of emergency medicine required are not readily available.

“Over the years, we have witnessed emergency situations which require timely movement of victims to appropriate medical facilities. Keeping in mind that every minute matters in securing the lives of people involved in these incidents, the usual movement by road is not the best option in such situations. Helicopters have therefore become an efficient and reliable option which can only be made possible with the availability of helipads within the hospital environment.

“Given the status of LASUTH, as the State flagship tertiary health institution, offering referral services for other public and private medical institutions, it was obvious the helipad had to be located here,” the Governor said.

He recalled that barely a month ago, a 27-bed Critical Care Unit was commissioned in LASUTH to provide life and organ support system for critically ill patients who require intensive monitoring and post-operative treatment, adding that the Helipad would go a long way to facilitate medical evacuation and air ambulance transfer of patients to Trauma Centers.

According to Governor Ambode, the provision of the facilities were consistent with the commitment of his administration to raise the service delivery capacity of LASUTH and other health facilities in the State to international standards to save lives of the people.

He said aside the fact that government will intensify efforts to acquire an Air Ambulance to complete the cycle, the Helipad would be operated by specially trained personnel who will give 24-hour service, guarantee expert medical care during emergency transfer and safe landing at all times.

The Governor also said with the recent execution of a Memorandum of Understanding with selected investors, the State is on the verge of becoming a hub for medical tourism once the Medical Park at the old School of Nursing, Ikoyi comes on stream.

The Governor, while inspecting the Intensive Care Unit, Faculty of Basic Medical Sciences and the Ayinke House at LASUTH, also announced termination of contracts of all abandoned projects at the complex, saying that his administration would not allow such to happen any longer in the State.

Earlier, the State’s Commissioner for Health, Dr. Jide Idris said by the commissioning of the Helipad, LASUTH was now on the verge of being elevated as level one Trauma Centre, adding that the Helipad was the first to be certified in the country for any State Government.

Also, the Chief Medical Director of LASUTH, Professor Adewale Oke said the Helipad was an eloquent confirmation that Governor Ambode is an achiever and deserved to be commended. He also announced that Governor Ambode has directed that motorists should not be charged for parking at LASUTH.