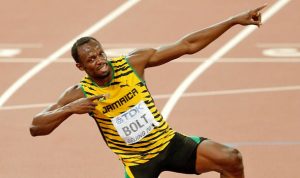 He crossed the line first, securing his place as the greatest sprinter of all time. Justin Gatlin of the United States was second in 9.89, and Andre de Grasse of Canada was third in 9.91. Bolt celebrated after his win while carrying a plush Vinicius, the Games mascot.

Bolt became the only sprinter, man or woman, to win the 100 three times. He is also favored for a third straight gold medal at 200 meters and as the most vital member of Jamaica’s 4×100-meter relay team.

Chrissy Teigen runs out half naked from her hotel Room during...