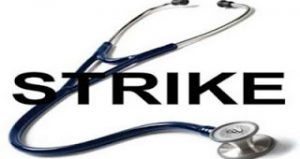 Resident doctors in University of Uyo Teaching Hospital (UUTH) say they are still on strike because the management of the hospital has yet to comply with the agreement to pay doctors’ entitlements.

The National Association of Resident Doctors, UUTH chapter, alleged that the hospital management did not comply with directives of the Federal Ministry of Health and National Salaries and Wages Commission to pay them their full salaries.

The president of the association’s chapter Dr. Christian Adeneye told newsmen in Uyo on Sunday that the association was not happy with the management on the development.

The association also accused the hospital management of inconsistent remittance of their pension contributions and counterpart funding by the Federal Government to Pension Fund administrators.

Adeneye alleged further that the hospital management had refused to sponsor members of the association for update courses and examinations for the past eight months.

He, therefore, appealed to Gov. Udom Emmanuel of Akwa Ibom and other well-meaning citizens of the state to intervene and resolve these issues for the strike to end.

“Doctors are very passionate about their patients who patronise the hospital but they can’t work without salaries,” he said.
But the Chief Medical Director of UUTH, Prof. Etete Peters, attributed the non-payment of the resident doctors’ salaries to drop in revenue accruing to the hospital.

He said the hospital received N3.9 billion in 2016 from the Federal Government as against N4.2 billion received in 2015.
Peters, nonetheless, said that management was working very hard to alleviate the suffering of the resident doctors in the hospital, observing that the problem of funds was not applicable to the hospital alone.

He appealed to doctors to call of the strike for the sake of the suffering patients and go back to work, pleading with them that the issues would soon be resolved.

Libya eradicate Congo from 2018 CHAN by way of penalties