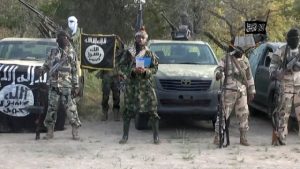 Boko Haram yesterday restated its conditions for releasing the Chibok girls and threatened to bomb Lagos, Abuja and Borno in a fresh video.

In a swift reaction, the Defence Headquarters (DHQ) said it was investigating the video which showed some of the Chibok girls in the background.

The government also said it was in touch with the people purportedly behind the video, adding that it will do everything possible to rescue the girls.

The video showed some girls in Hijab behind an armed Boko Haram militant wearing a desert camouflage combat uniform, a bullet proof vest and covering his face with a turban.

The girls stood behind a black backdrop – 13 of them standing and the rest sitting – while the armed spokesperson demanded the release of some of the captured militants in return for the girls.

The insurgent also claimed that some of the girls died in air strikes by the Nigerian Air Force, while some others have been married off.

He threatened to rescue the captured Boko Haram members held in Lagos, Abuja and Maiduguri (Borno). ”I specially inform our people in captivity in Lagos that they should be patient and continue with their prayers, God will take us to where no one expects and we will rescue them.

“All those in Lagos, Maiduguri and other southern parts of the country; keep praying, very soon, we will rescue you,” he said.

The 11-minute footage came amid the decimation of the terrorist group’s capability to further cause large scale destruction. The military through its counter insurgency OperationLafiya Dole has also arrested many members of the group.

The sect member also said in the video: ”They should know that their children are still in our hands; there is a number of the girls, about 40 of them, they have been married, some of them have died as a result of aerial bombardment,”

The insurgent also interviewed one of the girls who gave her name as Maida Yakubu, who claimed that she was abducted from the Government Secondary School (GSS) in Chibok, Borno state. The girl who appeared defiant speaks in her native language in what appears to be an appeal to the government to rescue them.

Director of Defence Information Brig. Gen. Rabe Abubakar said the military was examining the video clip to verify its authenticity.

In a telephone conversation with our correspondent, he described the video as “media war and technology in action’

The Defence spokesperson also debunked allegations in the video that some of the kidnapped girls were hit by an airstrike. According to him, the air operations were done through precision attack on identified targets. and locations.

“However, the issue of air raid on the location of Chibok girls is just mere propaganda trying to insinuate the citizens against their professional military. We are using precision airstrike equipment which has the capacity of picking only the targets and engage them.

Moreso, they said the location of the girls is only known to them. ”It is extremely difficult and rare to hit innocent people during airstrike because the operation is done through precision attack on identified and registered targets and locations. The Precision Airstrike is very effective at taking out targeted enemies because it is not a random operation. We are nevertheless studying the video clips to examine if the victims died from other causes rather from the allegation of airstrike.

Spokesperson for the Air Force Group Captain Ayodele Famuyiwa said: “We are not talking now on the allegations, we will address the issues later.”