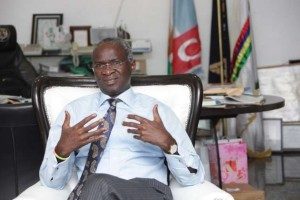 Babatunde Fashola, Minster of Works, Power and Housing has expressed frustration over the delay in the passage of the 2016 budget.

Speaking at a town hall organised by the ministry of information and culture, the former Lagos State governor said: “There’s a plan to deal with the road challenge, but unfortunately as I speak, there is no budget. Those of us that are tuned to public service will understand that budget is the article of faith, without appropriation, you can’t spend money,” he said.

He said the nation currently does not generate enough power to service the entire population, hence the epileptic power supply in the country. But he assured that government was working at delivering sustainable power.

“I will summarise the power issue simply in one word; there is no enough power. Five thousand MW for 170 million people is just not enough. The solution is delivering more power on an incremental and sustained basis,” he said.

“As far as roads are concerned, especially for road workers, road transporters and the unions, it is ultimately an index of doing business. The cost of transportation affects how cheaply or expensive food reaches the table, how efficiently services are delivered. If you just throw back a little bit, this country earned $100 per barrel of crude oil for a decade; other countries earned that kind of money. Are we as competitive as they were, or as they have become? Clearly, we have not spent our money wisely. Otherwise we shouldn’t have broken roads, otherwise we should have more power.”

He described the challenges in the housing sector as enormous.

“As far as housing is concerned, that is my most difficult responsibility. But there’s a template I have experienced, with which to move from. There have been some interesting housing initiatives in the past, by Lateef Jakande, by Shagari, by Gemade, who is now a senator, but have they been sustained? Clearly we have had stop and start, because there are no housing models that we can say, ‘This is the Nigerian home.’ We’re trying to develop models that address cultural issues, because it is one thing building houses and it is another thing to get people to live and own them,” he said. -The Sun