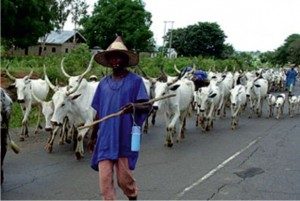 The victims were said to be working in their farmland when the herdsmen stormed the farm at about 6am and seized the farmers on the ground that they were responsible for the killing of four cows in the neighborhood.

Youth leader of the community, Comrade Chika Uwabuofu, however, said the victims were later released at about 2.30pm as tension was building in the community.

Uwabuofu, who lamented the unwholesome activities of herdsmen in the community, said: “For some time now, Fulani herdsmen have been harassing our men and women in their farmlands, eating the food in their barns and using their cows to destroy their crops.

“On account of this, we have been reporting their activities to the police and a meeting was held with the council chairman, some top government functionaries and the state chairman of the Fulani herdsmen where they were given three days to leave the community.

“Truly , they left, but after some days, some women came to report that some Fulani herdsmen were seen with their cows in the community. Then today, they held eight of our men hostage. We are not aware that their cows were killed as they are claiming.

“We appeal to the government to come and assist us by evacuating them from our farmlands because that is our only means of livelihood.”

As at the time of filing this report, security operatives were said to have been drafted to the community to restore peace and calm frayed nerves of residents. -The Sun