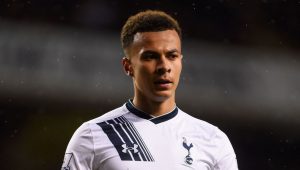 Dele Alli will miss the rest of the season, after he was hit with a 3-match ban for violent conduct.

The charge was a result of an incident between Alli and Yacob, in the 1-1 against West Brom.

The clash between the two players was not spotted by the match officials but caught on camera and resulted in England international Alli being charged with violent conduct by the FA.

Alli accepted the charge, although he failed in his attempt to contest the automatic three-match penalty at an Independent Regulatory Commission hearing.

A statement released by the FA on Thursday read: “Dele Alli will serve a three-match suspension with immediate effect after he committed an act of violent conduct which was not seen by the match officials but caught on video.

“The player accepted The FA’s charge but contested that the automatic penalty of a three-match suspension would be ‘clearly excessive’.

The punishment means Alli will not be available for Tottenham’s final three matches of his breakthrough season against Chelsea, Southampton and Newcastle United, with the likelihood that his next competitive action will be for England at Euro 2016.

Mauricio Pochettino’s Spurs are seven points behind leaders Leicester City in the table and victory at Manchester United on Sunday would secure the Premier League title for Claudio Ranieri’s team.