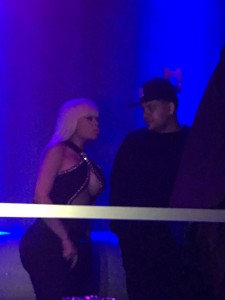 More than a week after they revealed at a Los Angeles gentlemen’s club that they were engaged, Blac Chyna and Rob Kardashian are taking their celebrations to the Big Apple.

The couple arrived at Aces Strip Club in New York City late Wednesday night, where Chyna was scheduled to make an appearance.

The 27-year-old model was clad in a black jumpsuit with a low-cut neckline and gold trim. Her beau kept his attire casual in a plain dark long-sleeved shirt, pants and a baseball cap.

Though they were surrounded by fans while seated in the VIP section, the pair didn’t appear to mind.

According to an eyewitness, Kardashian had his arm around his leading lady and they both looked very happy. “It’s a mob scene, but they are very content,” the eyewitness told E! News exclusively.

There was no shortage of alcohol for the pair. Moët and Chandon Rosé was spotted on the table, though Rob reached for a bottle of Hennessy Cognac. According to the eyewitness, his fiancé was not seen drinking anything.

To conclude the night, the club celebrated their recent milestone with a cake. Dessert and champagne, anyone?