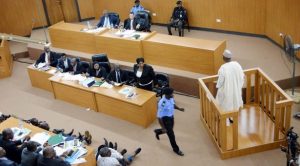 The Code of Conduct Tribunal, CCT has dismissed an application filed by a counsel to Bukola Saraki, asking the tribunal’s chairman, Danladi Umar to disqualify himself from the case.

On Thursday, one of his counsels, Rapheal Oluyede, who was appearing for the second time at the tribunal, rose up shortly after appearances were announced and attempted to introduce a motion which he said had been communicated to the tribunal on Wednesday.

“That motion as far as the tribunal is concerned is of no consequence; not worthy to be entertained and is hereby thrown away,” said Mr. Umar.