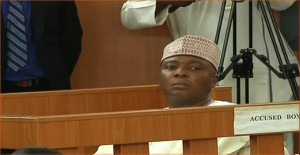 The Code of Conduct Tribunal has over-ruled an application for an adjournment by the Senate President, Dr. Bukola Saraki, and ordered his trial on 13 counts of false and anticipatory asset declaration, which was scheduled to commence today.

The Danladi Umar-led panel of the CCT gave the order in a ruling after a stand-down which he took to prepare its ruling after entertaining argument and counter-argument on Saraki’s application.
Umar ruled that the defendant’s application for adjournment offended provisions of the Administration of Criminal Justice Act, 2015.

When proceedings started at about 10.30am on Tuesday, the prosecuting counsel, Mr. Rotimi Jacobs (SAN), infor‎med the tribunal that the matter was on March 24, adjourned till today for trial to commence.

Jacobs told the tribunal that his witness was in court and was ready for trial to commence.

But defence counsel, Mr. Paul Usoro (SAN), urged the tribunal to adjourn the case till a period after the hearing of his client’s motion for stay of proceedings of the CCT which filed before the Abuja Division of the Court of Appeal only on Monday.

The defence only on Monday filed an appeal and an application for stay of the tribunal’s proceedings before the Court of Appeal against the CCT’s ruling delivered on March 24, 2014, dismissing Saraki’s application challenging the ‎jurisdiction of the CCT to hear the case.

Just this morning, the defence filed and served on the prosecution another motion for stay of proceedings before the tribunal.

Usoro gave the‎ appeal number as CA/A/172C/2016, adding that the appeal court had fixed April 26 for the hearing of his client’s motion for stay of proceedings.

But Jacobs opposed the application for adjournment saying it had the same implication as a motion for stay of proceedings which he said had been prohibited by section 306 of the Administration of Criminal Justice Act, 2015.

He faulted the records of proceedings of the CCT compiled by the defence for the purpose of prosecuting their appeal ‎on the grounds that it was not done in accordance with the law.

Jacobs maintained that the defence only decided to file their appeal and motion for stay of proceedings on the eve of the day scheduled for commencement of trial in order to ensure that the trial was stalled.

“Nothing can be built on an illegal process. You can’t build something on nothing. They will both crumble,” Jacobs said.

Jacobs said both motions asking for stay of proceedings filed before the tribunal and the CCT itself constituted an abuse of court process.

He said under section 396 of the ACJ Act which provides a party in a criminal case was only entitled to adjournment not more than six times.

According to him, since the commencement of the case in September last year, the matter had been adjourned more than five times at Saraki’s instance.

“This has become too much. My lord should refuse this application for adjournment,” Jacobs said. -Nigerianeye