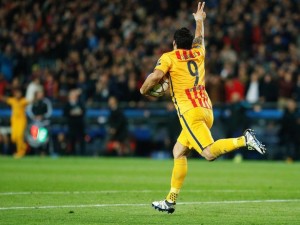 A second-half brace from Luis Suarez prevented Barcelona from losing against Atletico Madrid in their UEFA Champions League quarter-final match.

Barcelona, who were coming of a loss to Real Madrid on Sunday, were on the back foot early on as Atletico’s Fernando Torres gave Atletico the lead against the run of play.

Torres went from hero to villain shortly after, as he jeopardized Atletico’s position by getting sent off for a second bookable offence.

Atletico were able to hold on to their lead for the rest of the first half, but couldn’t contain Suarez after the restart, with the Uruguayan netting twice in the space of 15 minutes.