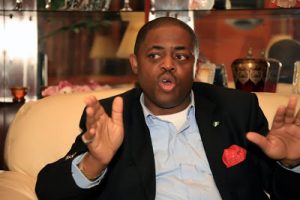 One of the former Aviation Minister Femi Fani-Kayode was frozen by Economic and Financial Crimes Commission (EFCC).
Fani-Kayode will have to live without one of his accounts for now as EFCC starts investigation on the alleged N4billion campaign bazaar cash received from ex-President Goodluck Jonathan in the build-up to the 2015 elections.

The funds were allegedly withdrawn from the Central Bank of Nigeria(CBN) and shared to 10 other directors, directorates, zonal directors and state directors of the Presidential Campaign Organization of Jonathan.

Fani-Kayode declared yesterday that he knew nothing about the withdrawal of the cash from the CBN or funding of the campaign by the former National Security Adviser, Col. Sambo Dasuki.

But he admitted that campaign funds were paid into the account of a company linked with a former Minister of Finance, Mrs. Nenadi Usman, from where it was shared to him and others.

He dared the EFCC to “do their worse” in a statement in Abuja entitled “The Money Transfers and the Truth about the Presidential Campaign Funds.”

The beneficiaries may be arrested for questioning by the anti-graft agency.

Giving his own side of the story,Fani-Kayode said he received the funds from ex-President Jonathan and he is accountable only to the former leader and not the EFCC.

He said the funds disbursed were not from public coffers and these were routed through a private company.

His words: “Our funds were given to us by the President who was the leader of our party through the Director of Finance of the PCO and we were not in a position to inquire into the sources of funding of the party’s campaign. Indeed, it was not our responsibility to do so.

“Once I got these clarifications and confirmations, I agreed to receive the funds into my bank account and use them for their stated purpose.

“The transfers were made and I used the funds to carry out all our operations during the course of the presidential campaign.

“It was an aggressive and well-run campaign and we gave our opponents a very hard time indeed. It was also very expensive and we barely had the resources that we really needed, but we did an effective job with the little we were given.

“The whole nation, including our friends and our enemies, can bear witness to that and they saw the excellent quality of our work. Hardly anyone can dispute this, yet some fail to appreciate the fact that such a strong showing costs a lot of money. Media and publicity campaigns cannot be run on goodwill alone. You need cash and plenty of it.

“During the course of the election and after its conclusion, I submitted detailed accounts of our expenses and evidence of our work to the Director of Finance of the PCO for onward transmission to the Director-General of the PCO and ultimately President Jonathan himself about how the money was spent and they were satisfied.

“Given the fact that these were not public funds, the only legal body that can inquire into our expenditure of campaign funds is President Goodluck Jonathan who set up the PCO.”

Continuing, he said: “I cannot sit by silently as my name is dragged through the mud in this way and I am convicted in the court of public opinion. This has happened to me once before and it took me seven years to clear my name. It will not happen to me again.

“Consequently I am constrained to take this opportunity to state the facts of this matter, set the record straight and await my traducers and accusers to make their next move. It is indeed time to challenge those that are making these allegations and to kill the lie.

“ The fact that my bank account was frozen on the orders of the EFCC two weeks ago without any explanation is proof of the fact that I am being targeted and that those that seek to have their wicked way with me are about to pounce.

“Given this, it is important that all the relevant facts are put before the world before I am subjected to the Dasuki treatment, put away indefinitely and not given the opportunity to defend myself before the public. Meanwhile, in their usual manner, after this is done, the EFCC will then flood the media with all manner of lies about my so-called atrocities which only exist in the figment of their imagination.

“The allegation of fraud and the receipt of public funds from the National Security Adviser’s Office and Central Bank into my bank account are false.

“These allegations are baseless, wicked, shameful and irresponsible. It is not true that any money was paid into my account by or from the National Security Adviser’s Office, the Central Bank of Nigeria or any other government agency or institution last year or at any other time.”

He said the funds were wired into his account and others through a company associated with ex-Minister Nenadi Usman.

“My team and I prepared the budget and it was approved.

“Rather than collect cash, for security reasons and the purposes of accountability, I was advised by the Director of Finance to open a bank account for this purpose, which I did.

“The funds were paid into that account in instalments at the beginning of last year by the Director of Finance and each deposit was authorized and approved by the Presi dential Adviser to the PCO, Chief Tony Anenih.

“The account that they used to transfer the money to me was a private company account which was owned or under the control of the Director of Finance.

“It was the same company account that was used to send money to all the other Directors of the PCO and the Zonal Directors, State Directors and all our PDP governorship and legislative candidates during the various campaigns.

“ When I asked about the sources of the funds, I was told by the Director of Finance that the funds were sourced from private individuals and private companies who opted to support and fund President Jonathan’s campaign. She told me that no money was paid into her company from any government official, account or agency. This she told me in the presence of witnesses and I believed her.

“ I was told that there was a fundraising event held by our party (PDP) which took place in early January 2015 in which billions of naira were raised specifically for the Presidential campaign. I believed this to be true and I had no reason to doubt it.”

The ex-Minister said the slush funds were shared to 10 other directors, directorates, zonal directors and state directors of the Presidential Campaign Organization of Jonathan.”

He wondered why he has been the subject of “absurd and outlandish headline stories in various newspapers which have accused me of being a fraudster and which have claimed that funds were transferred into my bank account by the former National Security Adviser, Col. Sambo Dasuki, and by the Governor of the Central Bank of Nigeria.”

Such stories, he claimed , portrayed him as having used public funds for the campaign of President Goodluck Jonathan.

He branded such stories as petty, shameful, nauseating and “ also a reflection of the desperation of those that seek to pull me down and destroy me simply because my opposition to this government has been unrelenting.”

“ In January 2015, I was appointed as the Director of Media and Publicity for the Jonathan/Sambo Presidential Campaign Organization by President Goodluck Jonathan.

The Director-General of the Campaign Organization was Senator Ahmadu Alli and the Deputy Director-Generals were Alhaji Ibrahim Turaki SAN (North) and Governor Peter Obi (South).

Chief Tony Anenih, an elder statesman and one of the most distinguished and revered leaders in our country, was the Presidential Adviser to the campaign organization.

“All these names that I have mentioned including all the other directors whose names I have not mentioned are, as far as I am aware, men and women of immense integrity and good character and they have mostly been either ministers of the Federal Republic or state governors at one time or the other in our history. It was an honour to serve alongside such people and I have absolutely no regrets about doing so.

“Yet given the fact that I was not the only director in the campaign organization and in view of the fact that all the directors and zonal and state directors got their funds from the same source and account as I did, one wonders why only I and three others should be singled out for this reprehensible treatment and these false allegations.

“ I chose to remain silent on the issue until now simply because the allegations have not been officially made by the Economic and Financial Crimes Commission (EFCC) or anyone else, but the newspapers keep citing their sources “inside the EFCC” as their basis for these shameful allegations.

Mr. Josef Goebbels, Chancellor Adolf Hitler’s information minister, when Germany was in the terrible grip of the Nazi party, said that once a lie is repeated enough times, it becomes truth to those who are continuously subjected to it. This is especially so if it goes unchallenged.”

Fani-Kayode, who took swipes at the EFCC in his statement, asked the anti-graft agency to “do the worst.”

He said: “Yet if this is an attempt to intimidate, silence or distract me, they shall fail because I am not a coward and I do not fear them or those that sent them to torment me.

“As long as Jesus is on the throne and our hands are clean, no matter how long it takes, we shall prevail and ultimately they will pay a heavy price for their malice, injustice and wickedness.

“These are facts and readers can be rest assured that I will say nothing different from this if and when I am formally asked by anyone or any agency.

“When the EFCC begins to leak their falsehood and salacious allegations to their agents in the media, kindly take note of the fact that, as usual, they will be telling tall tales and they will be lying.

“Now I challenge them to do their worse. I have no fear of them or of those who have sent them to do this dirty job. May God judge them all and may He reward them for their wickedness.

“The suggestion that the money was some kind of “cash bonanza” or “bazaar” as has been reported by the leading pro-government newspaper in the country today is childish and absurd.

“If that had been the case, I doubt that I would have been foolish enough to open a bank account to receive government funds or “bazaar funds” as this would have been easily traced.

“If I had anything to hide or if I was doing anything wrong, I would have insisted on collecting cash for my operations which would have been far easier to conceal.

“The fact that the EFCC gained access to my bank account and leaked details of it to the media, including my inflows, is not only a gross violation of my privacy, but it is also unlawful.” -Nigerianeye