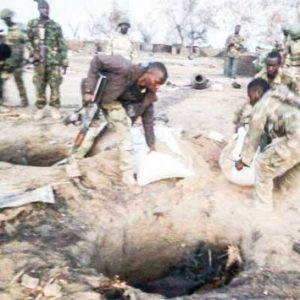 Nigerian military at the week­end war against Boko Haram as troops on counter-insurgency opera­tion uncovered the terror­ists’ underground food storage.

Army spokesman, Col Sani Usman, in statement yesterday confirmed the discovery, adding that the insurgents maintained un­derground food storage fa­cilities where they stocked large quantity of foodstuffs in a community at Bama Local Government in a bid “to save for the rainy day.”

“The essence of the op­eration was to stop the reported criminal activi­ties of remnants of Boko Haram terrorists hiding in the three villages. This be­came necessary as previ­ous efforts were futile. The suspected terrorists kept coming in search for food, water and shelter,” he said in the statement.

Describing the operation as a surprised dawn attack, the army spokesman said it yielded positive result as the troops also discovered “well concealed observa­tion posts on trees in the villages constructed by the terrorists to give them early warning of troops movement or approach.”

He disclosed that, at least, two Boko Haram members were killed in the operation where, he said, troops also recov­ered three AK-47 rifles, magazines and ammuni­tions. Two motorcycles were also recovered, he explained, while two chil­dren were rescued from the insurgents.

In a related develop­ment, troops of Operation Lafiya Dole and some Ci­vilian JTF, acting on a tip off, yesterday went on a clearance patrol to Borgo­zo-Alargano general area in which they discovered large cache of arms and ammunitions concealed.

According to a release by the theatre command­er, the patrol team also cleared remnants of Boko Haram terrorists that were dislodged from Alagar­no forest hibernating at Kadari, Camp Abu Fatima and Gursum.

In addition, the troops recovered one Toyota Hi­lux, one generator and several motorcycles.

Meanwhile, the Nige­rian Army has appealed to all Nigerians, particularly, the people of Adamawa, Borno and Yobe States to continue to provide useful information to troops, in order to facilitate complete routing of the remnants of Boko Haram insurgents hiding in their localities.

Meanwhile, the United Kingdom (UK) has as­sured that it would support Nigeria in the ongoing war against the Boko Haram insurgents.

UK Minister for Inter­national Development, Nick Hurd, told the News Agency of Nigeria (NAN) in Abuja that the UK had a very long cordial relation­ship with Nigeria.

He said: “The very long partnership between UK and Nigeria matters a great deal to us; even my Prime Minister has made it very clear that we stand shoul­der to shoulder with Ni­geria in the battle against Boko Haram.

“We understand how many thousands and mil­lions of peoples’ lives have been devastated by the atrocities in the North East.

“We are determined to help our own friend and partner to defeat that bar­baric group.’’

Mr. Hurd said at the moment, the UK’s sup­port took the form of a big commitment to training and capacity building in the military.

He said his country was pleased with the successes so far recorded by the mil­itary against Boko Haram insurgents recently. -The Sun