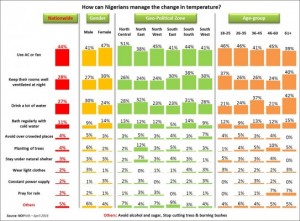 Latest public opinion poll results released by NOIPolls have revealed that most Nigerians have expressed great concern over the recent increase in weather temperature across the country resulting into a spate of heatwave. This is evidenced by the findings where a vast majority of respondents (94 percent) attested to a recent change in temperature in their locality. Consequently, 80 percent cited ‘increase in heat’ as the major noticeable change in weather and this is in line with recent weather forecasts by the Nigerian Meteorological Agency (NIMET) with temperature forecasts as high as 42°C in some parts of the country. In light of these findings, Nigerians have cited ‘tiredness/fatique’ (30 percent), ‘Headache’ (29 percent), ‘Rashes’ (24 percent) and ‘Dehydration’ (21 percent) among others as the obvious effects of this change in weather. Moreover medical experts have warned that extreme exposure to high temperatures can lead to serious health implications and even death especially among children and the aged. In line with this, the recent deaths of 20 children in Eti-Osa area of Lagos State has been attributed to measles and meningitis caused by excessive heat, with other deaths recorded in Benue, Niger, Sokoto, Kano, Katsina, and Kebbi States among others. [1]

While Nigerians are mindful of some of the effects of high temperatures, findings also showed that Nigerians are knowledgeable of some measures for managing the heatwave. In this light, most respondents (44 percent) were of the opinion that the frequent use of an ‘air conditioner or fan’ could be a way of managing this increase in temperature. Other measures identified include ‘keeping rooms well ventilated at night’ (28 percent), ‘drinking a lot of water’ (27 percent) and bathing regularly with cold water’ (11 percent) amongst others. Interestingly, these responses are in line with Dr. Eddie Wolff’s report on how to manage high temperatures.[2]

Furthermore, when the issue of awareness was assessed, only 2 in 10 Nigerians showed awareness of the recent warning communicated by NIMET on expected change in weather temperature. This highlights a gap in sensitization and enlightenment of the public; thus there is need for public agencies responsible for climate change and other environmental issues to rise up to the responsibility of sensitization on the issue of expected changes in weather temperature, implications for the general public and agricultural sector and possible measures to mitigate the negative impact of the changes especially in public areas such as schools, market places and religious gatherings. These are the key findings from the latest Heat Wave Poll conducted by NOIPolls in the week of April 4th 2016.

Global warming has steadily been on the incline the world over resulting in extreme temperatures and as a subset of the global environment, it is only expected that Nigeria would experience the effects of global warming and climate change as experienced in other parts of the globe. The recent increase in heat as attested to by a majority of Nigerians in what is supposed to be a time for rains is a major index of the growth rate of global warming, with tempratures climbing to as high as 40°C in some parts of the country.

Nigeria has been experiencing an unusually excruciating hot weather with a sprinkling of rain falls which can be ascribed to the supposed transition from the dry season to the rainy season which is peculiar to the month of March, this could also be attributed to the global average air temperature of the earth hitting 1°C hotter than it was at the start of the twentieth century. This rise in temperature is not only typical to Nigeria as 11 people died in Cape Town in South Africa and during the summer heat wave in Northern France in August 2003, exceptionally high temperatures during the day and night for a period of three weeks killed 15,000 people and the large majority were older people. Also, according to statistics,[3] there were over 2,000 deaths in England in the same year.

Over crowding, stagnant atmospheric conditions, over exposure to heat and over excercising are some factors that will expose a human to the effects of heat. People living in urban areas are more likely to experience hotter conditions than those residing in rural areas because of over-population and deforestation.[4] Some effects of heat like dehydration impairs both the physical and mental performance of humans, others like fatique and stress causes depletion of blood flow which may lead to hypertension and high blood pressure.[5] Heat has also been known to cause convulsions in children and menegitis which could lead to death.

The Nigerian Meteorological Agencies (NIMET), a federal government agency charged with issuing weather (and climate) forecasts has advised Nigerians to prepare for a future with more hot days, warm nights and heat waves[6]. Although Nigeria is in the tropics, there still exists a dire need for smart adaptation strategies and engaging in climate resilient practices to cope with the damage that this change in temperature might cause. Against this background, NOIPolls conducted its recent public opinion poll to gauge the awareness and perceptions of Nigerians regarding change in temperature as well as evaluate how they can manage these extreme situations.

In the light of the recent temperature rise and prevailing heat waves in Nigeria and other African countries,[7] the Nigerian Metroelogical Agency (NIMET) on 29th march 2016 warned Nigerians to brace up for more hot days, warm nights and heat waves across the country, because of the long residence of greenhouse gasses in the atmosphere.[8]

In line with the above, this survey results revealed that 94 percent of respondents have experienced a change in temperature in their localities. This cuts across gender, geo-political zones and age-groups. Interestingly, the findings also show residents from the Northern region accounted for the largest proportion of Nigerians who experienced change in temperature in recent times. On the other hand, a meagre 6 percent responded negatively to this statement. 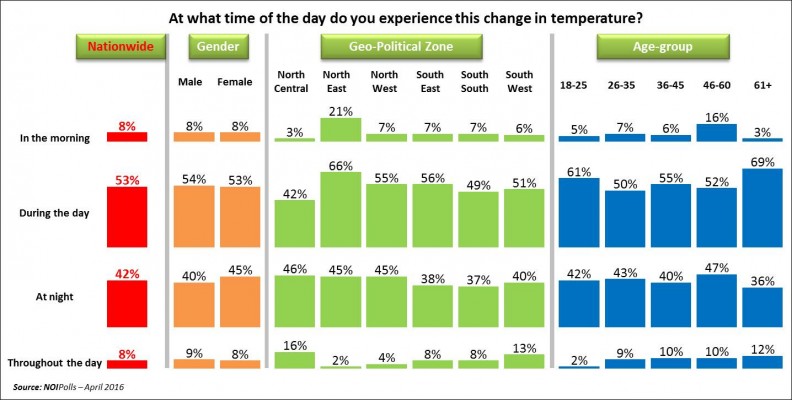 Subsequently, in ascertaining the exact kind of temprature change expereinced, respondents high-lighted ‘increase in heat’(80 percent) and the North-East zone accounted for the largest proportion of Nigerians in this category. This further supports the statement by the Director General of the Nigerian Metreological Agency that rainfall season this year would be characterised by late onset especially in the Northern parts of the country.[9] Also, 15 percent of respondents specified that they have experienced ‘extremely hot temprature’ lately and that the South-West zone (22 percent) and North-Central zone (21 percent) had the highest percentage of respondents in this category.On the other hand, 5 percent of respondents claimed that they experienced a ‘low temprature’ in their localities and residents from the South-South zone accounted for the largest proportion of Nigerians in this group.

Despite the prevalence of these heat waves, temperature levels are bound to differ across different times of the day. In view of this, findings revealed that a significant proportion (53 percent) of Nigerians affirmed that they experienced changes in temperature during the day and residents from the North-East zone (66 percent) have the largest fraction of Nigerians who experienced change in temperature during the day. This is consistent with the findings of Peter Akpodiogaga, which revealed that increasing temperature and decreasing rainfall in the North East region is as a result of the expansion of the Sahara Desert located close to this region[10].

Survey results revealed that the major effects of the change in temperature as indicated by Nigerians are ‘tiredness/fatique’ (30 percent), ‘Headache’ (29 percent), ‘Rashes’ (24 percent) and ‘Dehydration’ (21 percent) among other effects.

Furthermore, findings revealed that most Nigerians (44 percent) prefer to use ‘air conditioner or fan’ to manage the increase in temperature. Also, more female (47 percent) than male respondents (41 percent) indicated air conditioner or fan and this is consistent with a study by two Dutch Scientist which revealed that women have a lower tolerance for hot weather since their bodies produce more heat at a resting metabolic rate, getting warmer quicker than the men.[11] Other ways identified are ‘keeping rooms well ventilated at night’ (28 percent), ‘drinking a lot of water’ (27 percent) and bathing regularly with cold water’ (11 percent). amongst other.

The Nigeria Metrological Agency (NIMET) has warned that there will be less than normal, delayed and early cessation of rainfall than previous years across most parts of the country[12]. The level of awareness regarding the information by NIMET was assessed and the result shows that 8 in 10 Nigerians stated that they are not aware of the information. This high ignorance level infers that the agency should intensify sensitization and enlightenment in order to create the much-needed awareness on the issue. Contrarily, 20 percent acknowledged awareness of the warning.

In conclusion, this survey has revealed that 94 percent of the respondents have experienced a change in temperature in their localities with 80 percent of this proportion experiencing an increase in temperature mostly during the day.Temperature change affects every facet of society; economies, environments and cultures. As a result, policy makers, planners, decision makers and other stakeholders should increasingly seek more information on the nature of extreme temperature. Individually and collectively, such insights increase the capacity to manage the risks associated with temperature change, and thereby reducing the consequences that society might otherwise have suffered. It is also very imperative for the Nigerian Meteorological Agency (NIMET) and other stakeholders to device more effective means of disseminating information concerning temperature change as a significant 80 percent of Nigerians are still unaware of the advice by NIMET on change in temperature. -NOIPolls

Find out what friends say about Nomoreloss legacy