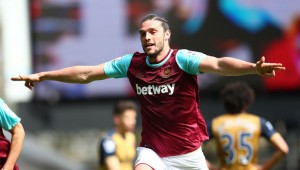 ​If you were expecting goals in Saturday’s early kick off at Upton Park, good on you. That’s exactly what we were treated to watching West Ham host Arsenal, but neither side were able to earn the three points they desperately craved as the season’s end draws near.

The two London clubs played out one of the games of the season and a 3-3 draw, with Hammers’ forward Andy Carroll’s hat-trick bound to steal the headlines.

The hosts went close early on through Manuel Lanzini, who just prior to the quarter of an hour managed to divert a header into the net from close range, only to see his attempt incorrectly ruled out for offside.

The decision wouldn’t have gone down well with the hosts on reflection, and they had more reason for annoyance within minutes as Arsenal took the lead. Nacho Monreal’s penalty claim was turned down but Arsenal retained possession and managed to thread in Mesut Ozil, who slotted in his sixth league goal of the season.

Alex Iwobi was enjoying his afternoon after a good recent run in the Gunners’ first team, assisting the first goal before playing Alexis Sanchez in for Arsenal’s second. Iwobi, Sanchez and Welbeck in particular were enjoying making the most of the space behind West Ham’s wing backs, as Slaven Bilic had opted to start with a back three.

Arsenal were cruising. In pole position, playing as though the pressure was off their backs with the home side barely threatening. That was until a minute before half time, where almost out of nothing the momentum shifted completely. Carroll did brilliantly to meet a pinpoint cross into the box from Aaron Cresswell to pull one back.

Remarkably, the Hammers were level before the interval. Arsenal failed to clear a West Ham corner sufficiently and following another cross, Carroll had time to chest the ball down and fire home at the second attempt. And within seven minutes of the restart he’d turned the match the full 180, meeting Michail Antonio’s cross at the back post with his head to make it 3-2.

The knives were out, on social media especially. “Andy Carroll for England!” did the rounds and Gunners’ fans were bewildered yet totally unsurprised that their side had fallen behind from two goals up. The match was incredibly open and the scoring, you felt, wasn’t finished.

Arsene Wenger made a host of attacking changes – sacrificing both of his defensive midfielders in order to swing the match again – while the home side felt they could seal the turnaround with another goal. In the end, it was the unlikely Laurent Koscielny who equalised for Arsenal with twenty minutes remaining on the clock.

For each side’s end of season hopes, it was a match they needed to win. Any failure to do so surely meant Wenger’s side’s pursuit of Leicester would cease, while West Ham needed the points in order to keep the pressure on both Manchester clubs in the race for fourth place.

Neither could grab the win late on though, and both may feel some disappointment despite the feast of football they served up in one of the Boleyn Ground’s final Premier League games.