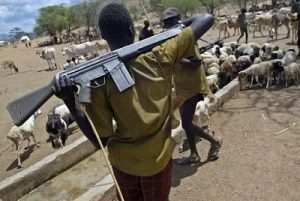 It was tears yesterday at Agadama-Uwheru community in Ughelli North council of Delta State as one of the 31 persons killed by suspected Fulani herdsmen, Stephen Omamuge Ajaita, was buried.

The victim, a father of three, was one of the 31 persons killed between 2012 and 2015 by suspected Fulani herdsmen in Uwheru kingdom. He was said to have been shot severally in the head with an AK47 rifle as he and other persons tried to ward off the herdsmen from their farms.

He was reportedly killed and abandoned on his farm for several days by the herdsmen as the villagers were too scared to rescue him. His body was later retrieved by members of vigilance groups from adjoining Urhobo communities in Ughelli North.

According to the President-General of the Uwheru Community Development Association, Chief Ogarivi Utso, the herdsmen always arrive in the community during the dry season especially, around November of every year in several trucks loaded with cows. When they come, they take over the open lands, ponds and farmlands and bar indigenes from entering.

According to him, the herdsmen shoot their guns openly in the air as their trucks arrive in the community to inform the people of their presence and to warn them to stay away from the open lands and farms which they subsequently occupy with their herds. The herdsmen leave at the beginning of the rainy season and return in November.

The president-general said Uwheru people now live in perpetual fear as the Fulani herdsmen have wreaked havoc on the kingdom in the past 12 years. They were alleged to have committed assault, rape, maiming and killing of some of the indigenes.

He gave a list of all the people of the Uwheru kingdom who had been killed by the herdsmen since 2012. The list, he said, did not contain names of those killed and whose bodies were never found. He estimated them to be about 10.

Utso said the problem with the herdsmen in Uwheru started in 2004 when Ohoro community of Uwheru was invaded by suspected Fulani herdsmen with the active collaboration of soldiers, during which many houses, including the palatial residence of the then President-General of the community, Mr. Emmanuel Enivwegha, were destroyed. He disclosed that 10 youths, including one Mr. Edjerigho Enivwegha, the immediate younger brother of the then president-general, were killed during the invasion.

“Ohoro was like a floodgate that opened the way to further invasions of the entire Uwheru kingdom till date. Uwheru are peace-loving people known world over as groundnut producers. The majority of them engage in hunting, farming and fishing activities, but the brutal activities of the herdsmen are killing these economic activities of the people and have thrown them into hunger,” Utso said.

He lambasted the police and the Department of State Services (DSS) at the Ughelli North council area for allegedly doing little or nothing to assist the Uwheru people.

According to him, the yearly occupation of Uwheru by heavily armed herdsmen has continued to create hardship for the harmless people of Uwheru.

Utso said all efforts to contain the herdsmen, including bringing them to a roundtable discussion had failed, adding that representations made to all government levels and the police over the years did not yield any positive result.