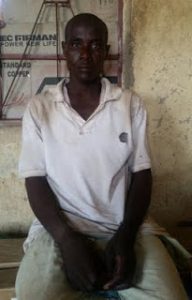 Members of umbrella body representing the Chibok community, the Kibaku Area Development Association (KADA), yesterday kicked against the reference to Mohammad Hayyatu – the Boko Haram fighter who put the rescued Chibok girl Amina Ali in the family way – as her husband.

Hayyatu should instead be referred to as a Boko Haram sexual exploiter, not a husband, they said, adding that Amina had no husband before she was abducted and whoever was rescued with her should not be so described.

The chairman, KADA Abuja, Tsambido Abana, who spoke to reporters, stressed the community’s dissatisfaction at the military for refusing them access to Amina since her rescue.

He said: “We condemn, in strong terms, the calling of Mohammad Hayyatu as Boko Haram husband of our daughter; rather, upon confirmation by the Nigerian military, he should be referred to as ‘a Boko Haram sexual exploiter’. Amina had no husband and whoever that was rescued with her should not be referred to as her husband for any reason. They should be treated separately until Amina is fully rehabilitated.

“We will not support discussion with the government or any agency of government in company of Mohammad Hayyatu.

“We are strongly calling on government to set up a team of expert investigators to probe Mohammad Hayyatu’s involvement in Boko Haram that led him to be the sexual exploiter of our daughter Amina so as to allow the law to take its proper course. He should be treated based on what investigations will reveal, not to conclude from the start that he was also an abductee. Even if he was also abducted and forced to marry her, he should not be referred to in any way as her husband, because there was no consent.

“All stakeholders – parents, Chibok Community (KADA), BBOG etc – should be involved in any process of discussing and relevant actions relating to Amina and her colleagues that we are expecting their rescue soonest, for the purpose of transparency and confidence building.

“We are insisting Amina Ali’s mother/guardian and the Parents’ Association Chairman, Mr. Yakubu Nkeki, should be part of the decisions that concern her wellbeing.

“We are asking for a safe haven to be provided for Amina, her mum and her baby. A safe home that is controlled by her family with the reasonable amount of security support but not overbearing.

“The Chibok community wishes to be involved in any further decisions on our daughters. We are dissatisfied with the approach of the military, and the government in shutting us out of verification process. We therefore refer government and its agencies to the Verification, Authentication and Reintegration System that BBOG designed with the participation of our community. It lays out the proper process for handling the return of our daughters. That was not done in this case and we would not want any recurrence.

“The Chibok Community frowns at the Federal Government and Borno State Government in treating Amina like an item. She is a traumatised young woman who needs immediate care and not any further media circus. We demand to see our daughter today in Abuja as leaders of the community.”