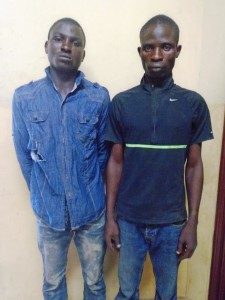 The suspects, Taoreed Ashimiyu, 24, and Kayode Jolaade, 34, were allegedly caught in the act by policemen after they had successfully removed three phones from commuters in different BRT buses.

Upon their arrival at the RRS headquarters, the duo reportedly confessed to the crime, saying that they were experts in robbing commuters in Mile 12 and Maryland.

One of the suspects, Taoreed, who hails from Yemetu, Alawada in Oyo state, said that he spent the proceeds from stealing on prostitutes.

“I have not spent a dime from my proceeds in stealing on anything tangible. I womanise a lot and I spent my monies on both young and old ladies. I smoked indian-hemp and drink all sort of hard drinks,” he said.

Taoreed revealed that before his arrest, he had removed two mobile phones from commuters during a rush at the Maryland bus-stop, adding that his third attempt led to his arrest.

“My accomplice caused my arrest today. Before he joined me at Maryland, I had stolen two phones successfully.

” But when he came around, we had to be moving in pair. People who had known him in the area were monitoring us ,unknown to us,” Taoreed stated in his confessional statement. -The Nation