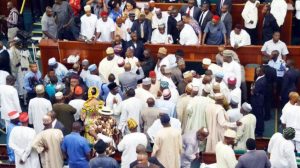 Ibe Kachikwu was expected to explain the reason for the hike in the price of petrol from N86.5 to N145.

Femi Gbajabiamila, leader of the house, had moved the motion for the lower legislative chamber to admit Kachikwu into its fold.

But when Yakubu Dogara, speaker of the house, put the motion to a voice vote, a majority of the members chorused “nay”, protesting against allowing Kachikwu into the chamber.

But Dogara ruled against the majority voice which sparked a shouting match, disrupting the proceedings.

Some members soon started chanting: “All we are saying, save Nigeria.” This continued for about ten minutes.

The speaker tried to calm frayed nerves, but members in both the Peoples Democratic Party (PDP) and All Progressives Congress (APC) divide continued to square off in a non-violent brawl.

While APC members of the house shouted “change”, their PDP counterparts chanted “shame” apparently in derision.

When normalcy was restored, Dogara called on Leo Ogor, deputy minority leader, to make his submission.

Ogor suggested that the house should go into an executive session and his recommendation was upheld. -TheCable

India will get ballistic missile