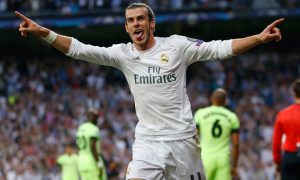 Spanish giant Real Madrid reached their second Champions League final in three years with a 1-0 aggregate defeat of Manchester City after a win by the same scoreline in their semifinal second-leg tie on Wednesday.

An own goal in the 20th minute ensured the Bernabeu side a trip to the Milan final, where the face city rival Atletico Madrid, just as they did in the 2014 showpiece in Lisbon.

Real fashioned the first chance of the game in the 14th minute, but Cristiano Ronaldo’s header from an inviting Carvajal cross went over the bar, much to the Portuguese’s dismay.

The home side, though, found the opener six minutes later — Gareth Bale receiving a Carvajal through pass and firing a right-footed shot over Joe Hart and into the Man City keeper’s far corner after a suffering slight-but-decisive deflection from a defender.

Madrid thought they had a second in the 36th minute. From a set piece, Pepe looked to have bundled the ball in the net after a loose-ball scrum, but the central defender’s initial run was ruled to have been offside.

Fernandinho nearly levelled for the visitors a minute before half-time — his low, hard shot to the near post kissing Keylor Navas’ upright before going out of play.

Bale and Ronaldo looked to be struggling with injuries in the final moments before the break but returned for the second half, with Bale picking out the Real No. 7 with a long ball on 51 minutes only to see Ronaldo scuff his attempted left-footed volley.

Bale played in Luke Modric with a left-footed chip moments later only to see the midfielder’s side-footed shot well-saved by a charging Hart. Ronaldo then had another headed chance immediately after but shot straight at Hart.

Hart saved a Ronaldo lashed effort in the 59th after the Real captain had been played in by a through ball on the right, before Bale hit the crossbar with a looping header in the 64th minute from a Los Blancos corner.

The hard-working visitors found it difficult to fashion any clear chances throughout the second stanza, despite the introduction of Raheem Sterling on the hour mark.

Sergio Aguero shot inches high from 25 yards away in the 89th minute, but City would come no closer as Real’s search for an 11th European title remained alive.

Zimbabwe:Mnangagwa to interact Interpol to seek out exiled Mugabe allies’