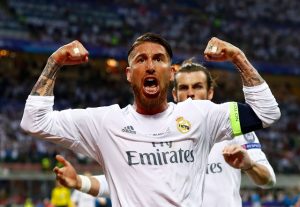 Sergio Ramos’ first-half goal was cancelled out by Yannick Carrasco in the 79th minute, but neither team could find a winner in 120 minutes.

In the shootout, Atletico’s Juanfran missed and Cristiano Ronaldo delivered the clinching penalty for Real to secure their second Champions League title in three years, and their fifth since 1998.

Real were in control early as Gareth Bale earned a free kick on the side of the box in the sixth minute.

The Welshman played the ball into the six-yard box, where Karim Benzema and Casemiro converged to redirect the ball on target, but Jan Oblak made a point-blank save.

The play was physical from the start, though English referee Mark Clattenburg kept his cards in his pocket until Dani Carvajal forced his hand with a late tackle on Griezmann in the 11th minute.

Real Madrid were in the lead four minutes later after Bale drew another foul 35 yards from goal.

Toni Kroos sent in the free kick, Bale perfectly flicked the ball on with the top of his head, and it fell for Ramos to get the crucial touch past Oblak from close range.

Replays showed Ramos might have been offside after Bale’s flick, but the goal stood for the defender’s first strike in the Champions League since he equalised against Atletico in the 2014 final.

He is only the fifth player — and first defender — to score in two Champions League finals, joining the select group of Cristiano Ronaldo, Raul, Samuel Eto’o and Lionel Messi.

Atletico earned more possession of the ball after Ramos’ goal and Griezmann began shooting at every available opportunity, but his efforts rarely caused concern for Real Madrid keeper Keylor Navas.

Within the first minute of the second half, Real handed Atletico a lifeline when Pepe bowled over Fernando Torres in the box.

Navas was issued a yellow card for delaying Griezmann from taking the resulting penalty, and perhaps that did enough to throw off the Frenchman, whose hard shot clanged off the underside of the bar.

Real Madrid were forced into their first change shortly afterward as Carvajal limped off in tears, replaced by Danilo.

But the setback did not demoralise Atletico, who continued to come close to finding an equaliser. Stefan Savic poked the ball just beyond the post in the 54th minute, Koke curled a ball over the bar in the 58th, and Saul Niguez’s volleyed effort also flew wide.

Benzema had a chance to make Real’s lead comfortable on 70 minutes when he raced in from the wing, but Oblak stopped his shot.

Ronaldo, largely anonymous for most of the game, had his best chance to score in the 78th minute when he tried to back-heel the ball in, but Oblak again rose to the challenge, and Bale’s effort from the rebound was cleared off the line by Savic.

Real Madrid were made to pay just a minute later when Gabi lofted a ball down the right side for Juanfran, whose cross found substitute Yannick Carrasco for the equaliser as Lucas Vazquez was pulling him down.

As the game went to extra time, both sides had a couple of chances as they cautiously pushed forward, but neither could find a winner, meaning the final would be decided from the penalty spot for the first time since 2012.

With Real shooting first, the first seven shooters were on target before Juanfran hit the post for Atletico and Ronaldo sent the winner into the top right corner.

Real Madrid have now won the Champions League five times since it was rebranded in 1992-93, to go with their six European Cup trophies from the 1950s and ’60s.