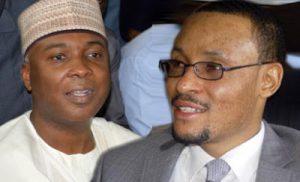 The Senate President, Bukola Saraki again challenged the procedure of his trial before the Code of Conduct Tribunal (CCT) for alleged false assets declaration.

This time, Saraki has filed a fresh application seeking among others, an order asking the Chairman of the tribunal, Danladi Umar to disqualify himself from further presiding over his trial.

Saraki, in the fresh application filed by his lawyer, Kanu Agabi (SAN), accused Umar of making statements capable of being prejudicing the outcome of the trial.

The Senate President cited the reported statement by Umar, where he deplored the delay tactics being employed by Saraki’s legal team and noted that the delay would not affect the consequences of the trial on the defendant if found guilty.

The application, already served on the prosecution may not be heard today as it (prosecution) was yet to respond the it (application) yesterday.

Although Saraki had, since his trial commenced late last year, filed series of applications, challenging the jurisdiction of the tribunal, the competence of the charge filed against him, among others, this is the second time he would be asking Umar to disqualify himself from the trial.

The first he filed through one of his lawyers, Ajibola Oluyede, is currently a subject of appeal, having been rejected by the tribunal.

Although the tribunal is empowered under the Administration of Criminal Justice Act (ACJA) 2015 to delay the hearing of such applications to the end of trial, it is not clear if Umar will elect to hear this one now, having heard similar interlocutory applications in the past.

Saraki’s legal team is expected to have its 12th day of cross-examination of the 1st prosecution witness in the case, Michael Wetkas.

The prosecution, led by Rotimi Jacobs (SAN) has complained on several occasions that the defence was wasting too much time on just one of the many witnesses it intends to call.

Jacobs expressed similar view on the last hearing date of June 7, when he complained that the defence was unduly delaying proceedings having spent 11 days cross-examining a single witness presented by the prosecution.

In response to Jacobs’ compliant, Umar had said: “I am not happy at the delay tactics by the defence counsel. And I must say this thing out, that this delay tactics will not reduce the consequences the defendant will meet from this tribunal at the end of the trial if he is found guilty.”

Responding on behalf of the defence, Agabi told the tribunal that the defence team was not comfortable the tribunal Chairman’s view on the allegation of delay made by Jacobs.

“As the tribunal Chairman, we love you, we respect you, but we are afraid of consequences, especially as just stated by this tribunal this morning. Our fears have been reinforced, but we pray against consequences that are against natural justice,” Agabi said. -The Nation