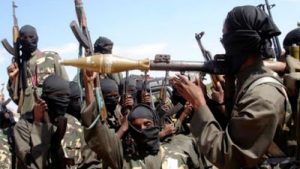 According to an eye witness, Abdul Ibrahim, the insurgents, numbering over 100, stormed the village at 10 pm, and in the ensuing shooting spree killed 24.

He added that 10 persons also sus­tained various degrees of injuries.

While revealing that 18 corpses were discovered on Thursday night after the insurgents had left the village, Ibrahim stated that the remaining six corpses were recovered from the surrounding bush early in the morning.

Bemoaning the bloody attack, Ibra­him lamented that the majority of per­sons killed were women and children. He added that those injured in the attack were rushed to Gulak Cottage Hospital, three kilometres from the village, for treatment.

Another resident, Jacob Gulak, who also spoke said he counted 18 corpses, adding that 10 other persons were injured.

He, however, said that more corpses might still be recovered from the bush as many villagers were still missing.

In his reaction, the Public Relations Of­ficer of the Adamawa State Police Com­mand, Othman Abubakar, confirmed the attack.

“So far 18 people have been killed in the attack but the number of the casualties could not be ascertained,” he said.

In another development, 2 suicide bombers targeting crowded areas have been intercepted and killed by youth vigi­lante called Civilian JTF in a community in Maiduguri.

Residents of Kushari, a rustic settle­ment west of Maiduguri saw two strange fellows loitering around a street in the area in the early hours of yesterday and quickly alerted the Civilian JTF in the area, Saleh Mohammed, a resident told Saturday Sun.

“The two men dressed in an unusual way. They were in jeans and shirts with another top. They appeared restless and people immediately noticed they were not from the area hence the curiosity of the residents. We alerted the Civilian JTF but the two men started running as soon as they saw the CJTF, “ he disclosed.

He said the CJTF quickly pursued the suspected bombers who fell while their improvised explosive devices strapped on their bodies were exposed. “The CJTF opened fire on them killing the two,” he added .

A top leader of the CJTF who preferred anonymity confirmed the incident, saying the bombers suspected to be Boko Haram members were targeting crowded areas within the community.

Recall that the 2015 Muslim Rama­dan fasting recorded some bomb attacks, prompting residents to mount more sur­veillances around mosques this season. The Sun