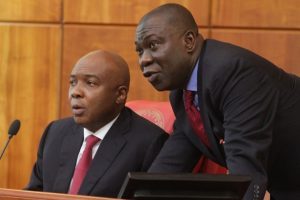 Ahead of Monday’s planned arraignment of Senate President, Dr Bukola Saraki and his deputy, Ike Ekweremadu over alleged forgery  of the Senate Standing Rules, there  are strong indications that the duo may be handed stringent bail conditions .

Both are scheduled to be arraigned before Justice Justice Yusuf Halilu of the Federal Capital Territory High Court on two-count charge of forgery and conspiracy to commit forgery. They were billed to be arraigned on Tuesday, but the plan was stalled.

However, it was gathered at the Federal Ministry of Justice and Office of the Attorney General of the Federation  that Saraki and Ekweremadu would be given tough bail conditions .

“Saraki and Ekweremadu may be slammed with stringent bail conditions on June 27,” a source in the office said.

He claimed that “the plan is to ensure they are presented with conditions which they cannot meet immediately.

“The conditions will be such that they will struggle with them for some days before they could wriggle out of the court’s dragnet.

“The ministry will not allow them ride rough-shod on it or enjoy a free ride.  Although the source did not give details of the plan,  he said, the Federal Government was aware that Saraki and Ekweremadu could wriggle out of the forgery and conspiracy allegations against them.”

Last Wednesday, the PDP caucus in the upper legislative chamber announced that it was withdrawing its support for President Muhammadu Buhari over the move.

Last year, some Senators in the Senate Unity Forum initiated a court case where they alleged that the rules used to elect Saraki and Ekweremadu were forged.

Consequently, the case was referred to the police for investigation which recommended prosecution of those involved. -The Sun