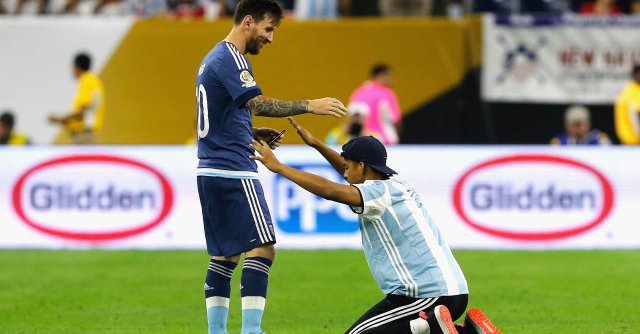 An Argentine fan ran to the pitch to paid homage to Argentina captain Lionel Messi during their 4-0 Copa America triumph against USA on Tuesday.

At the start of the second half, a young man ran onto the field with a pen in hand, in an effort to get Messi’s autograph on his Argentina jersey.

With security nowhere to be seen, Messi signed the guy’s shirt, but that was just the beginning.

The man sunk to his knees, before he waved his arms down at Messi to indicate he’s a god.

The Barcelona star looked slightly embarrassed by the adulation, and he tried to pacify the fan by getting close to him.

The upshot was the pitch invader embraced Messi in a long hug, before they separated, only for the fan to bag a second big hug with his idol.

Watch the footage below.