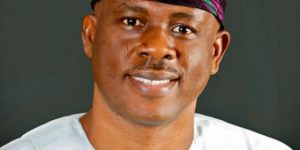 Three days after raiding their properties in Lagos, the Economic and Financial Crimes Commission has written to formally invite the sons of a former minister of state for defence, Musiliu Obanikoro.

Letters of invitation say Babajide Obanikoro, and his brother, Gbolahan, should appear before Hamza Abdulahi, an EFCC investigator, on June 22, 2016 by 10:00 a.m. at 30A Harper Crescent, Zone 7, Abuja.

“This commission is investigating a case in which your name featured prominently,” wrote Kanu Idagu who signed the letter, dated June 15, 2016, on behalf of the acting Chairman of the EFCC, Ibrahim Magu. “In view of the above, you’re requested to kindly report for an interview with the undersigned.”

It was also gathered that operatives also raided Mr. Obanikoro’s property in Abuja on Thursday and Friday.

Sources familiar with the development said EFCC had taken possession of the home.

Meanwhile, the former minister on Thursday filed a suit at a Federal High Court in Lagos for the enforcement of his fundamental rights, as well as those of his family members accused by the EFCC of financial wrongdoing.

In suit number FHC/L/CS/826/16, filed by their lawyer, Ogwu Onoja, the Obanikoros sought, amongst other reliefs, a compensation of N100,000 million from the Nigerian government.

The EFCC had on Tuesday stormed Mr. Obanikoro’s residence in Lagos.

Also searched was a property said to belong to Mr. Obanikoro’s eldest son, Babajide, where officials carted away vehicles and other valuables in a raid that lasted several hours.

The properties are located at Parkview Estate and Onikoyi Drive, both in the Lagos highbrow suburb of Ikoyi.

Mr. Onoja argued in the affidavit that “the seizure and detention of the applicants’ several items, properties and personal effects, constitute a gross violation of their fundamental rights guaranteed under Section 43 of the 1999 Constitution of the Federal Republic of Nigeria and Article 14 of the African Charter on Human and Peoples’ Rights Act, Cap. 10, LFN, 2004.

“The seizure and continued detention of the applicants’ several items, properties and personal effects, are neither known to any law nor permitted by any law or procedure and, therefore, not justified.”

No date has been fixed for hearing of the suit, which is yet to be assigned to a judge.

Mr. Obanikoro and his two sons, Jide and Gbolahan, were not in the country when the properties were raided. But they vowed to challenge the actions of the government within and outside the country.

Officials accused the family of looting up to N4.7 billion in public funds, allegedly using shoddy companies and other proxies to perpetrate the act.

Speaking to PREMIUM TIMES in his first interview since the raid, Mr. Obanikoro denied any wrongdoing and dared the Nigerian government to commence extradition process against him and his two sons.

According to the court filings, Mr. Onoja said the following items were taken from his clients’ properties during the raid:

5. Photocopy of data pages of passports