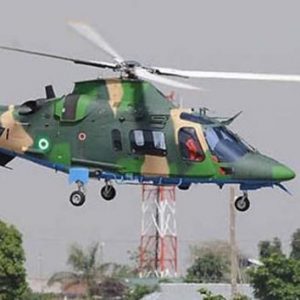 All is now set for the battle of supremacy between the new militant group, Joint Niger Delta Liberation Force (JNDLF), and the Nigerian Air Force (NAF), as the group’s deadline to launch six missile in the region expires tomorrow.

NAF says it would not fold its arm and allow a “small group of criminals” dictate the pace.

Chief of Air Staff, Air Marshall Abubakar Sadiq, who made this known while com­missioning some projects on NAF bases at Yola, Adamawa State and Maiduguri, Borno State said already, the NAF, has in­tensified its deployment in the Niger Delta region to deal with the emerging threats of economic sabotage.

Abubakar, while saying that the NAF will not rest on its oars “until we ensure the protection of every inch of the country’s territory and infrastructure” urged mem­bers of the public not to panic on sighting low level flying aircraft.

He equally enjoined the public to go about their legitimate businesses even as he appealed for useful information that would lead to the whereabouts and activi­ties of the militant group.

The new militant group threatened to commence the testing of its six missiles which would last for three days.

However, there were discordant tunes within the militant groups operating in the region with other group warning against the killing of soldiers and oil workers.

The Niger Delta Avengers (NDA) which claimed responsibility for the ongoing attacks on oil installations, disassociated itself from threats to launch missiles in the region.

It said it would allow the Nigerian mili­tary to first start the war so that “when it is time to engage the military in combat the whole world will know they started the war, not the Avengers.”

But the NAF said it would not take the discordant messages from the group for granted saying that its deployment was necessitated by the recent spate of attacks on the nation’s oil and gas installations.

To this end, the NAF said it increased air operations around critical infrastructure in Delta, Bayelsa, Rivers and Akwa Ibom states.

“These include but not limited to Escravos, Forcados in Delta State; Bonga oil field, Agbami offshore and Brass in Bayelsa; Bonny in Rivers; Qua Iboe Termi­nal in Akwa Ibom State and Opuekeba in Ondo State,” NAF said.

The deployment to Niger Delta accord­ing to the NAF chief was in support of the military operations code named “OPERA­TION PULO SHIELD” against militancy, economic sabotage and all forms of crimi­nalities in the South-south region of the country.

FCDA in bother over demolition of Patience Jonathan’s property