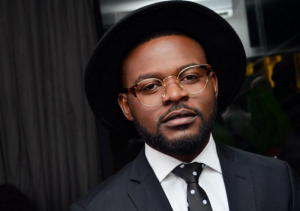 Thank you so so much to everyone that voted and used the hashtag #ipickFalz !!!! 🙌🙌💋💋❤️❤️

Falz is known for his funny skits on social media, breaking out with a popular ‘Ello bae’ catchphrase which became viral pretty fast. The fast rising entertainer who happens to be a rapper started out with a music group “School Boys” he formed with a friend back in high school, releasing a compilation mixtape titled “Shakara” in 2009.

In 2011, Falz released a single titled ‘Waz up guy’ before he went on to release ‘High Class’ and ‘Currency’ which gained him grounds in the Nigerian music industry.

The rapper has got two albums out “Waz Up Guy” (2009) and “Stories that touch”(2015) which have both received critical acclaims.

The comic rapper has been nominated at award shows winning Best Actor in a Comedy Movie/Series at the 2016 Africa Magic Viewers Choice Awards for his role as ‘Segun’ in Funke Akindele’s TV series ‘Jenifa’s Diary’.

The BET Awards which will be hosted by Anthony Anderson and Tracee Ellis Ross premieres on BET (DStv channel 129) on Tuesday 28 June at 19:00 CAT.

It will feature performances by Alicia Keys, Maxwell and more, as well as a star-studded tribute to legendary pop icon Prince featuring Sheila E., The Roots, D’Angelo and Janelle Monae.

Mnangagwa: Mugabe made no errors