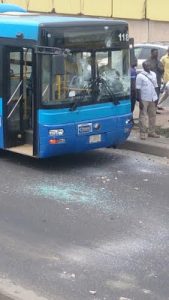 Pandemonium broke out, yesterday, along Ikorodu Road, Lagos, following the destruction of over 10 BRT buses by a mob protesting the death of a hawker allegedly caused by officials of Kick Against Indiscipline, KAI.

The street hawker, identity unknown, was clad in a yellow T-shirt and a blue jeans trouser, was dashing across the road in Maryland, to evade arrest by KAI officials, when he was knocked down by a truck. His death sparked off a violent protest as a mob started vandalising BRT buses belonging to Primero Transport Service Limited.

The bus drivers, who were taking off their uniforms, and passengers abandoned the vehicles and fled for their lives.

The situation was hijacked by hoodlums, who started dispossessing women of their bags. Police sources hinted that five persons were arrested in connection with the chaos, adding that the damaged BRT buses were taken to the Lagos State Traffic Management Authority, LASTMA, office, while the truck that crushed the hawker was taken to the police station.

Lagos State Police Public Relations Officer, Dolapo Badmos, confirmed the incident. Reacting to claim in the social media that the hawker was crushed by a BRT bus, the Commissioner for Information and Strategy, Steve Ayorinde, explained that a truck belonging to a soft drink company was responsible for the death.