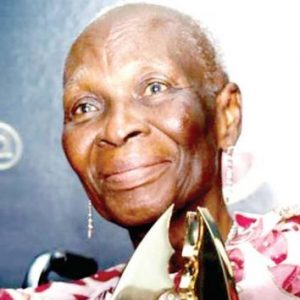 EMOTIONS ran high yesterday as veteran actress, Buk­ky Zainab Ajayi, was laid to rest according to Islamic rites at Atan Cemetery, Yaba, Lagos, a few hours after her death. The thespian passed away early Wednesday morning after a brief illness. She was 82.

Until her death, Ajayi was one of Nollywood’s most experienced actresses. With movies like Mother of George, Indecent Girl, Diamond Ring, Witches, Thun­derbolt, and Critical Assignment, the thespian definitely wrote her name in the annals of Nigerian movie industry.

Ajayi’s last public appearance, which many agreed as the climax of her career, was at the Africa Magic View­ers Choice Awards (AMVCA) held on March 5, 2016 at Eko Hotel & Suites, Victoria Island, Lagos where she was wheeled on stage to receive a well-deserved Life Achievement award. After receiving her plaque, Ajayi gave an emotional speech, which drew tears from not a few guests at the event.

“I wish I could stand up but if I stand up, I will fall down. You are all standing for me. Thank you. I am very grateful,” she said with tears.

Born February 2, 1934, Ajayi displayed a deep love for the theatre at a tender age and her father, who used to take her to watch movies, had influenced this.

Fondly called Mama Bukky Ajayi, the actress studied Drama at the Stanislavsky Institute of Drama, London. She worked briefly in London before returning to Nige­ria in 1965 after which she kick-started a broadcasting career, working as an announcer, presenter and news­caster at Nigerian Television Authority (NTA).

At NTA, Ajayi presented a couple of children’s pro­grammes including Nigerian’s Sketches, which pro­moted Nigerian culture. However, the actress got her screen break when she secured her first TV role in the now rested popular drama series, Village Headmaster in the ‘70s. She went on to play a cameo in Amaka Igwe’s Checkmate. Despite her age, Ajayi never dumped acting, as she remained active in Nollywood until the very end of her life.

She was an international artiste that worked in Ger­many and London before she finally came back to Nige­ria. What a great loss to the industry. She is a far better actress than most of the ones we have today. I will per­sonally miss her.

As president of the Directors’ Guild of Nigeria, I re­ceived with shock news of the death of veteran actor, Bukky Ajayi. I commiserate with the immediate family and the entire Nollywood on this loss. May her gentle soul rest in peace.

I commiserate with the family of the late Bukky Zain­ab Ajayi. She will be fondly remembered. May her gen­tle soul rest in peace.

A blessing to Nollywood

Bukky Ajayi lived a good life. She was a blessing to her family, friends and also Nollywood. Thank you for everything. Rest in the bosom of the Lord.

Bukky Ajayi is a great woman. I can’t bring myself to say ‘was’. This generation is thankful for the life she lived. Rest Well.

She gave all to acting

Here is a woman who gave her all to the profession she cherished. I am happy she was celebrated at the AMV­CAs. May her soul rest in peace.

I’ve always dreamt of playing her daughter in mov­ies

She was a gift from God. I have always dreamt of playing her daughter in movies, but it’s quite unfortunate that never happened. Rest in the bosom of the Lord.

Stars don’t die; they wax in glory. She shone morning, noon and night. She shone all the way to glory. Sleep in the bosom of the Lord, mama-

It’s my ambition to act with her

I didn’t get to meet and act with her, which was my dream, but I know we will act together when we meet to part no more. Rest on mama.

She came, she saw and she conquered

Bukky Ajayi was a very brilliant actress. One thing I can say for sure is Nollywood just lost one of the best actors. She came, she saw and she conquered. May her soul rest in peace.

A breath of fresh air

She was a breath of fresh air. I was fortunate to share moments with her. She will forever be loved and remem­bered. Adieu Mama Bukky Ajayi.

I regret not working with her

It’s so unfortunate that I didn’t work with her. May Almighty Allah forgive her sins and make the grave easy for her to rest.

We lost a mother. With her heart of gold, she mentored and made me confident when I was nobody as far back as 2009.

A legend has gone

A legend has taken a bow! Thanks for all you did.

She lived for noble course

I’m still feeling her last speech at the AMVCA and tears are rolling down my eyes, and I ask myself, why can’t we celebrate our icons when they are still with us? Bukky Ajayi lived for a noble course and she shall for­ever be remembered.

Her death is painful

Her passing is both painful and glorious. Painful be­cause she was such a lovely soul and glorious, because we got a chance to celebrate her one last time. Thanks to the AMVCAs. Rest on Mama.

A courtroom verdict towards PDP which will reshape Nigerian politics