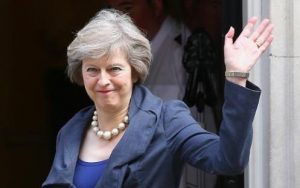 Theresa May just gave her first speech as the British Prime Minister at around 6:00PM (Nigerian time)

She said “In David Cameron I follow in the footsteps of a great modern Prime Minister”.

His true legacy, she says, “is not about the economy but about social justice” – including the Lib Dem policy of taking the poorest out of income ta.

“The full title of my party is the Conservative and Unionist party – and that word unionist is very important to me,” she says.

“It means we believe in the union – the precious precious bond between England, Scotland, Wales and Northern Ireland.”

And it means recognising the union between people rich and poor, black and white, she says.

Theresa May doubles down on her promises to fight for social justice as Prime Minister.

Addressing poor families directly she says: “I know you’re working around the clock. I know you’re doing your best. I know sometimes life can be a struggle.

“The government I lead will be driven not by the interests of the privileged few, but by you.”

She adds: “When it comes to taxes, we will prioritise not the wealthy, but you”.

She concludes her short statement by saying: “Together we will build a better Britain”.