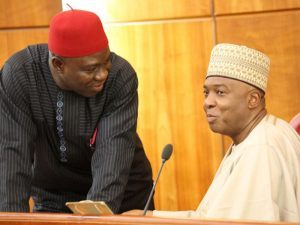 ATTORNEY-GENERAL of the Federation and Minister of Justice, Mr. Abubakar Malami has said the forgery suit instituted against Senate Presi­dent, Bukola Saraki and his deputy, Ike Ekweremadu would protect Nigeria’s democracy rather that truncate the democratic process.

He made the declaration yesterday when he appeared before the Senate Committee on Judiciary, Human Rights and Legal Matters to explain reasons for instituting the two-count forgery suit against the presiding officer, his deputy and two others.

The AGF’s appearance which came a day after the Senate president threat­ened to invoke relevant sections of the constitution against him (AGF) ended a three-week muscle-flexing between the red chamber and the chief law officer of th federation.

During the meeting, the AGF main­tained that as the law enforcement officer, he has the duty to institute a criminal trial against anybody.

Members of the committee during the interaction, queried the forgery case instituted against Saraki and Ekwere­madu, arguing that since the legislature was an independent arm of govern­ment, the action was taken in error.

But Malami who was kept waiting for over an hour without any apology, said he had a clear obligation to do whatever should be done within the context of the constitution in order to sustain the democratic process.

“The issue that constitutes the basis of this invitation is a criminal case instituted against certain members of the Senate. It is an act that predates my appointment. There are series of suits. The date of interest is 23rd of July, 2015.

“I was appointed on the 12th of November, 2015. That is four months after the investigation was concluded by the NPF. I have an obligation in the sustenance of democracy to institute a legal action from an investigation that has been concluded. It was based on this that I took the action.

“The action was not taken to truncate any democratic process, but was taken to protect the democracy. There are now two pending cases in court. One is a civil case instituted by some Senators. The other is a criminal case instituted by the office of the AGF. These two matters are subjudice. When a matter is before a court of law, nobody is entitled to look into it.

“I am guided by the Senate Standing Rules 53. One of the cases was insti­tuted by the office of the AGF. It will be wrong to make any comments on a case still in court. The two matters are pend­ing. Based n that, I will not say more.

“To my mind, the issue had been overtaken by events. I have a tradition of honouring social invitations, much less of an institution like the Senate. I know what they stand for. My inability to come was not out of arrogance or anything. I was out of the country when the invitations were sent.

“The National Assembly has the pow­ers to regulate its own procedure. But the basis for filing my case was that the position taken was not that of the Sen­ate. The Senate Standing Rules allegedly amended in 2015 did not follow the traditional way of amendment. It can therefore not be the position of the Sen­ate. That is where my quarrel comes in.

“If there are certain persons that did not allow the process of amending the Senate Standing Rules go through the constitutional process, we have a responsibility to act by way of initiat­ing a criminal proceeding against those involved. The public interest and the need to ensure that no abuse is allowed, I have to take the step to prevent that.” -The Sun