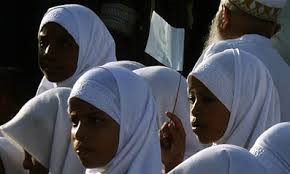 A Court of Appeal’ five man panel sitting in Lagos today reversed the ban on the use of hijab (Muslims head-scarf) by students in public primary and secondary schools in Lagos State.

The court reversed the judgment of a Lagos State High Court which on October 17, 2014 banned the use of hijab in public schools, in order to preserve the secular nature of the state institutions. Female students are now allowed to put on Hijab with their school uniforms.