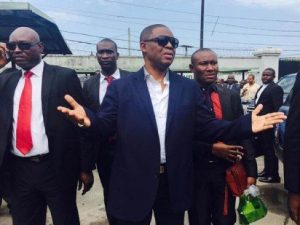 Former Minister of Aviation and spokesman for the Goodluck Jonathan Campaign Organisation, Mr. Femi Fani-Kayode, has described his experience in detention as traumatic and depressing.

Fani-Kayode, who was released on Friday night, told our correspondent on Saturday that though his freedom after 67 days in government’s custody would allow him to prepare his defence for allegations levelled against him by the Economic and Financial Crimes Commission, it would be meaningless if other people in detention are not released.

“It was quite an ordeal. It was an ordeal. But I thank God that I am free and that I have been given an opportunity to defend myself in court when the case starts – I am looking forward to that. Outside of that, the truth is that as long as others who are also political prisoners and have been falsely accused are still in (security agencies’) custody our country, then I believe that my freedom is meaningless.

“So, until every single political prisoner or every single person falsely accused by the state, by the government and the EFCC has been released; has been given the opportunity to defend himself in court; and until that happens, I don’t think any of us is free. We still have people like Sambo Dasuki, Iyiola Omisore and many others in prison or EFCC’s custody,” he told Punch

The ex-minister also said his release would allow him to prepare for any eventuality, noting that the President Muhammadu Buhari-led government is intolerant of criticisms.

He said, “You have people in EFCC custody – husbands and wives locked up for no good reasons. It is very traumatic and depressing but now, is not the time to talk; right now I am preparing my defence. I am preparing for any eventuality because I know the government is capable of doing anything to anybody at anytime, who criticises them.

“I am also preparing and praying for what lies ahead. Whatever the case, the struggle will continue and then we shall prevail. Those that seek to impose an ethnic and religious bondage and servitude on people of this nation will not succeed. And, every Nigerian, regardless of his religious faith or where he comes from, will and shall be treated equally – and that’s what we are fighting for.”

Asked if he ate food prepared for him in prison, he said, “While in prison, I only ate food that was brought to me by my wife. The prison officials were very professional. People were treated like human beings and that is to be commended. But being in EFCC’s custody is a different kettle of fish. I am glad to be free at last. I pray that this country is delivered from the sort of evil where people are just accused and locked up indefinitely and maligned by the press.”

Fani-Kayode was accused by the EFCC of receiving N840m during the build-up to the 2015 presidential election and arraigned on June 28, 2016, before Justice Hassan on 17 counts of conspiracy, unlawful retention of proceeds of theft and money laundering.

He was, however, granted bail in the sum of N250m on July 4. As part of his bail, he was ordered to deposit his passport in the custody of the court pending the outcome of the case.

NGO pays 43 out of Jos Prison