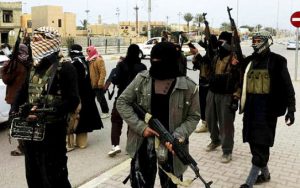 London is next on the list of target cities for twisted jihadis along with the US capitol Washington DC, it has been claimed.

Images threatening attacks in London and other major world capitals have been posted on jihadi messaging app Telegram, according to SITE Intelligence Group.

One picture chillingly shows New York’s Statue of Liberty engulfed in flames but with the caption “Washington soon” – referring to the US capital 225 miles away.

The threat comes as security at British churches is being ramped up amid a new terror alert after ISIS knifemen forced a French priest to kneel before slitting his throat on camera.

The source of the threats against London and Washiington and whether they are credible or not is unknown.

It comes after ISIS terrorists forced an elderly parish priest to kneel before filming themselves slitting his throat on Tuesday.

Father Jacques Hamel, 85, was made to get to his knees before he was brutally butchered at the Church of the Gambetta in Normandy today, says a nun who escaped the attack.

British counter-terror police have now “circulated specific advice” to churches across the UK amid fears of a similar attack.

“We are also taking this opportunity to remind them to review their security arrangements as a precaution.

He added: “There is no specific intelligence relating to attacks against the Christian community in the UK.