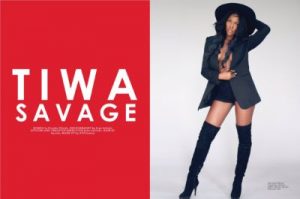 Off her previously released album titled “R.E.D” on the Mavin Records, Nigerian Diva and vocal powerhouse, Tiwa Savage dishes out a remix to one of the records off the compilation.

The album was predominantly produced by Don Jazzy, with additional work from Baby Fresh, Altims, Spellz and P2J. “My Darlin’” and “African Waist” were released as two singles from the album; the former was released on 8 October 2014, while the latter was released on 21 December 2015.

R.E.D is an acronym for Romance, Expression and Dance.  This  New Record by Tiwa savage  is titled “Keys To The City” and it features Jamaican dancehall reggae act, Busy Signal. The new remix To ‘Key to the city’ is sure going to spice your Mood!