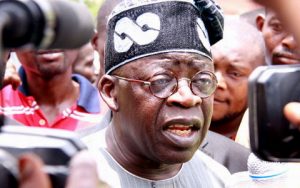 Asiwaju Bola Ahmed Tinubu, A former Governor of Lagos State and National Leader of the All Progressives Congress, has vowed to deal with Senator Dino Melaye (APC-Kogi), if he dares beat his wife, Senator Oluremi Tinubu (APC-Lagos).

Melaye had on Tuesday vowed to beat Senator Tinubu during a closed-door session of the Senate over the forgery case against Principal Officers of the Senate.

Tinubu had expressed disapproval of the tactic suggested by Melaye, who was of the opinion that commencing impeachment proceedings against President Muhammadu Buhari will make the Executive back down on the trial.

He went to the extent of saying to Senator Tinubu: “I can fuck you.”

Reacting to the development, Asiwaju Tinubu vowed to deal with Melaye if he takes any untoward action against his wife.

Speaking through his spokesman, Sunday Dare, Tinubu said Melee’s comments was a major low for him.

Dare, writing on his Twitter handle, said: “A‎nd if Dino thinks nothing will happen if he dare beats up another Senator, then he must be living in a fools paradise.

“Dino Malaye sunk to the lowest ever today.

“From this point, it is downhill for him.

“A disgrace to the Senate of the Republic‎.”